After Bezos announced his trip to space, two petitions calling for the billionaire’s re-entry to Earth to be stopped were launched.

Washington: More than 97,000 people have signed a petition to stop Amazon founder and CEO Jeff Bezos from returning to Earth after he flies to space next month. Notably, Bezos along with his brother, Mark, and another person, will fly to space on July 20 on a reusable rocket made by his space company Blue Origin. He will only be in space for 11 minutes as part of the first crewed flight aboard New Shepard, his Blue Origin rocket. The rocket system is designed to carry as many as six people at a time on a ride to the edge of space.Also Read - Trip to Space: Here's How Much Ticket For 11-Minute Trip With Jeff Bezos Cost

“Ever since I was five years old, I’ve dreamed of traveling to space. On July 20th, I will take that journey with my brother. The greatest adventure, with my best friend, Bezos said when sharing an announcement video to Instagram earlier this month.

On July 20th, #NewShepard will fly its first astronaut crew to space. We are offering one seat on this first flight to the winning bidder of an online auction. Anyone can place an opening bid by going to https://t.co/6DpTdTxo36. #GradatimFerociter pic.twitter.com/jBMFYX7xHg

Well, after Bezos announced his trip to space, two petitions calling for the billionaire’s re-entry to Earth to be stopped were launched.

“Billionaires should not exist…on earth, or in space, but should they decide the latter they should stay there,” one petition’s description on Change.org reads with the title ‘Do not allow Jeff Bezos to return to Earth’. So far, more than 97, 175 people have signed it. 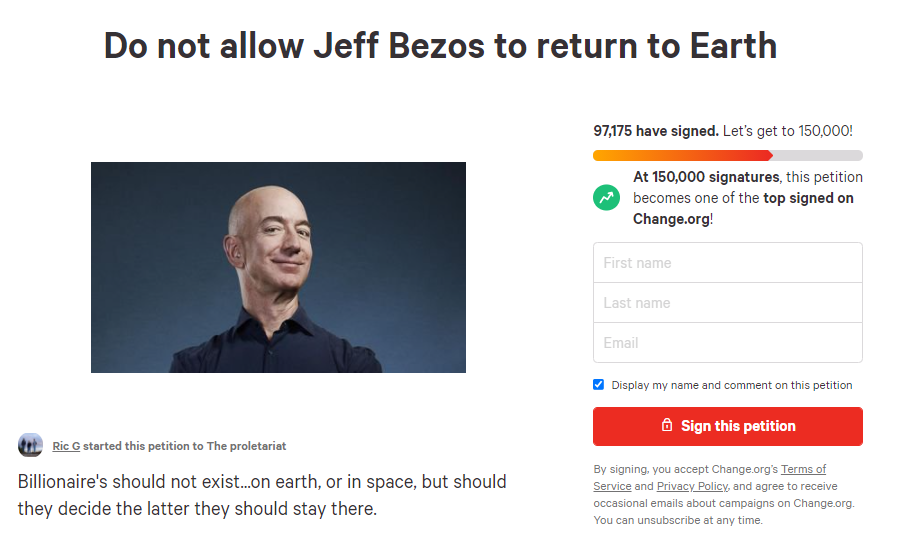 Meanwhile, more than 20,000 people have signed another, titled “Petition To Not Allow Jeff Bezos Re-Entry To Earth.”

Among the reasons listed on the petition were comments such as “being let back into Earth is a privilege – not a right,” and “Earth don’t want people like Jeff, Bill, Elon and other such billionaires.”