The most iconic weapons from films

These weapons have given many memorable moments from the films they were a part of. 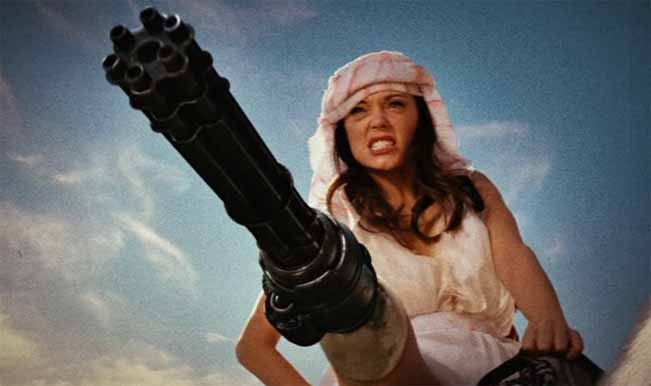 Films with violence have always fascinated the minds of many even if you don’t accept it openly. We look at some of the most memorable and violent units of mayhem. Also Read - UFO Report: US Govt Can't Explain Mysterious Flying Objects, Doesn't Rule Out Aliens

Warning – Viewer discretion advised, some of the videos contains nudity, gore and lots of violence. Also Read - Loki Season 1 Episode 1 Explained: Who is Evil Lady Loki And Why She is Pitted Against Variant Loki?

The sword forged by Hanzo Hattori, probably the best sword maker in all of humankind, is so sharp that when Uma slashes it against her opponents their swords get cut off like a piece of string. Hanzo Hattori is retired but when Uma Thurman tells him that the vermin she intends to kill is his former student, Bill, he agrees and makes her a kickass sword. Check out the final shpowdown between Uma Thurman and the goons of Lucy Liu.

A stripper has her leg sheared off during a post-Apocalyptic war only to be fit with a prosthetic assault rifle with grenade launching and burst fire capabilities. During the end of the movie when peace is kind of restored, she sports a Terminator style minigun on her right leg.

The 1983 film features the Glaive which is like a starfish from outer space which springs out blades and also returns to the thrower like a boomerang.

The fictional war machine which loads a magazine of 100 explosives, armour piercing, caseless and light rounds (bullets) also has a shotgun under the main barrel.

‘Say hello to my little friend’, is a classic dialogue people have ripped off in many scenarios mainly because of the deviant behavior of Al Pacino as a crime lord whose mansion is under siege.

Thor’s hammer gives him the ability to control lightning and also allow him to fly between worlds. The hammer is an integral part of Thor’s story from Norse mythology.

Logan aka Wolverine is fooled by Agent Stryker who is trying to make the perfect solider by pooling a combination of the best powers from mutants. Due to his fast acting regenerative powers, Logan’s skeleton is fused with Adamantium, making him almost indestructible.

Built from Vibranium, the shield absorbs all vibrations and makes for a nifty protector for the scientifically engineered superhero.

The archeological crusader has been on many adventures from returning Crytsal Skulls to surviving atomic blasts by hiding inside a refrigerator but his trustworthy whip has saved him on multiple situations to get out of sticky situations.

The most powerful six shooting handgun ever made held by Clint Eastwood, ‘Do you feel lucky, punk?’

The ultimate in sword technology, you can summon the hi-tech laser sword if you are a Jedi or on the Dark Side. Star Wars is a cult with psychotic levels of followers but the Lightsaber duels were one of the best things from the series.

After making his escape from captivity with a crude effort, Tony Stark perfect his design with the Mark II and despite small changes to aesthetics, there are major ammunition and armour upgrades which we can see in the Iron Man movies. Enjoy the making of the awesome Iron Man suit.