The Shaukeens trailer: Yet another desperate sex comedy, you don’t want to watch 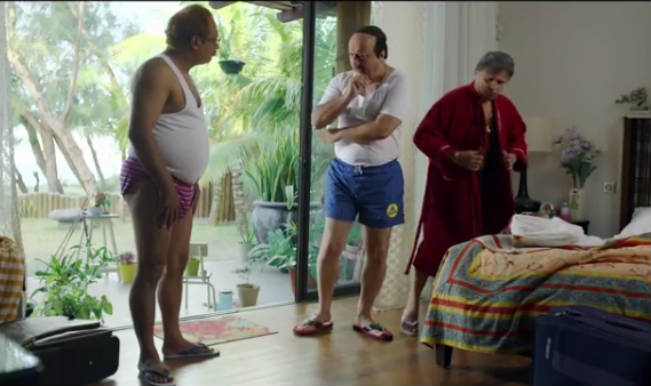 Also Read - Laxmmi Bomb Gets a Release Date on OTT Platform, Akshay Kumar Shares Details of Where And When to Watch

The much awaited official trailer of The Shaukeens is here! The film features the trio Annu Kapoor, Anupam Kher and Piyush Mishra in a remake of the 1982 film Shaukeen. The trailer starts with the introduction of Shaukeen #1 is Anupam Kher who is portraying the role of Laali, a sadly married man, Shaukeen #2 is Annu Kapoor who is playing the role of KD, the single love guru and Shaukeen #3 is Piyush Mishra as Pinky, the happy widower. Also Read - When Rekha Became ‘Cold-Hearted Man-Eater’ After Husband Mukesh’s Death; Read Subhash Ghai, Anupam Kher’s Shocking Statements Back Then

The movie revolves around the trio of oldies who are desperate when it comes to women. Although the movie promises to be a rib-tickling comedy about being youthful forever, the oldies will rather seem to come across as perverts. The oldies seem desperate to add spice to their life! Seriously we have had enough of sex comedies! Also Read - Akshay Kumar's New Poster: Bell Bottom Makers Unveil Actor's New Look on His Birthday

The trio goes out to Mauritius and stay with Haydon who is for some unknown reason a die-hard fan of Akshay Kumar! Akshay Kumar is playing himself in the movie and just to add some drama is portraying the character of an alcoholic. And not to mention, Akshay features in the movie with his overbearing larger than life acting skills.

Haydon is head over heels in love with Akshay Kumar, in a desperate attempt to meet Akshay Kumar she blurts out, “Who do I have to sleep with, to meet Akshay?” And then the trio go out to make her lame dream come true!

Directed by Abhishek Sharna, The Shaukeen stars Anupam Kher, Annu Kapoor, Piyush Mishra and Lisa Haydon in pivotal roles. The movie is produced by Cape of Goods film, Muran Khetani and Ashwin Varde. The movie is set to release in November 7, 2014.