The Week That Was: The rise and fall of Godman Rampal, Arpita Sharma’s wedding finally ends and Chetan Bhagat – the plagiariser

This week was dominated by a Godman who didn’t believe the law of the land didn’t apply to him, Mamata Banerjee doing what she does best, Lionel Messi rewriting the history books and one wedding that seemed to last for an eternity. 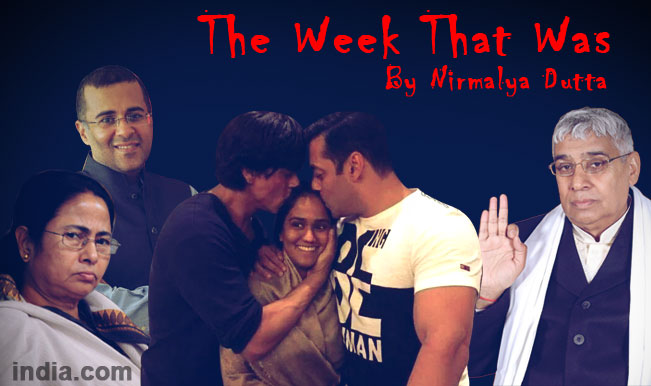 The Week That Was takes of a contrarian and nonsensical view of all the ‘important’ events of the week! And this week was dominated by a Godman who didn’t believe the law of the land didn’t apply to him, Mamata Banerjee doing what she does best, Lionel Messi rewriting the history books and one wedding that seemed to last for an eternity. Also Read - Bigg Boss 14 October 21 Episode Major Highlights: Captaincy Task Breaks Friendships in The House

This wasn’t the first time a Godman’s followers clashed with others – they were earlier called the Crusades – but this has to be the most bizarre incident in modern India. For two weeks, Rampal’s followers had been clashing with the police to prevent his arrest from his fortified ashram! Now that the dust has settled, the police have recovered some bizarre items.  The police found weapons including three.32 bore revolvers, 19 air guns, two .12 bore rifles, two .315 bore rifles, chilly-grenades and cartridges were also found in the ashram and a home pregnancy test! Well at least this time there will be no claims of impotency a la Asaram Bapu!

Mamata Banerjee does what she does best – protest!

There are some political leaders who love to in state of constant dissatisfaction, the chief among them being Mamata Banerjee and Arvind Kejriwal. Mamata sees CPM-Maoists everywhere, while Arvind sees Ambani-Adani! So it’s no surprise that members of her refused to attend the all-party meeting convened by Parliamentary Affairs Minister Venkaih Naidu, ahead of the Winter Session. Former quiz enthusiast and TMC MP and spokesperson Derek O’Brien tweeted: ‘TMC not attending this all-party meeting. We are not available at BJP’s beck and call. Written a letter recording our point of view.’

Derek, here’s a quiz question for you – what does the Left, Samajwadi Party, Shiv Sena and Trinamool Congress have in common? Your time starts now!

A scholar has accused Chetan Bhagat of plagiarising, claiming that the plot of his novel Half-Girlfriend was lifted from his play Englishia Boli! While accusing authors of plagiarism is the norm, the most famous author to be accused of it was the Bard – William Shakespeare. The similarities between them are startling. In his time, Shakespeare was also maligned for his writing which was considered vulgar and pedestrian and for the masses. Maybe a 100 years from now – when they’re only communicating in emojis and SMS language – Bhagat will be held in the same reverence as the Bard! After all, he wrote complete sentences!

Personally, I’ve nothing against big weddings, if you are going to spend your entire life with just one person, you might as well have a ball before starting down that hellish road. But it gets irritating when every single excruciating detail is shown as breaking news. Thankfully, it’s over now and the media can go back to comparing Salman, Shah Rukh and Aamir’s abs, instead of their hugs!

For the last few months, Indians have been waiting with bated breath for Ebola to finally come to the country because apparently tuberculosis, malaria, dengue, malnutrition and all the desi epidemics aren’t just cool enough! Even in our diseases, we prefer foreign imports! Everyone finally got their wish when a 26-year-old from Liberia who had been cured of Ebola arrived at Delhi airport but they’re keeping still keeping him under isolation until his body fluids test negative! Sigh, if only we fought our other indigent health problems with the same enthusiasm!