When Pataudi princess Sara Ali Khan did her first round of interviews before Kedarnath hit the screens in December of 2018, people were smitten by her blend of suave and sassy. People definitely did not expect a royal kid with beauty and brains take the industry in a stride, barely at the age of 22 years and many marvelled at her History grad from Columbia.Also Read - From Prince And Yuvika to Riteish And Genelia, Your Favourite Stars Were Spotted Here | Watch Out

Unfortunately, the intellectual sheen started to topple off as more interviews followed but the tip of the iceberg was Sara’s latest post on #AllLivesMatter where she not only showed solidarity with the movement but also discredited the raging #BlackLivesMatter wave that trickled from America to the rest of the world. Also Read - From Jasmin Bhasin in Orange And Black to Aditya Narayan in Blue, Know When And Where These Celebrities Were Spotted | Watch Out

Triggered by the recent gruesome murders of George Floyd, Ahmaud Arbery, and Breonna Taylor, the #BlackLivesMatter shook the conscience of even Bollywood celebrities who had otherwise stayed mum on eerie similar incidents back in their own backyard. Also Read - Mrunal Thakur Has THIS To Say To All Aspiring Actors On How To Deal With Casting Couch | Watch

Bollywood was already on the radar for melting their spines and not speaking up on the various lynchings across the country in the past half a year, not showing solidarity with students who were attacked by the Delhi Police and continue to be put behind bars for peaceful sit-in protests, nor questioning the government for its ill-equipped methods to provide for the migrant workers amid the COVID-19 crisis.

While celebrities including Swara Bhasker, Anurag Kashyap, Mahesh Bhatt and another handful of them did speak up, the mainstream ones looked the other way. Netizens called out their hypocrisy when the same celebrities who gave a cold shoulder to the ill-treatment of minorities in India, went all out to share black posts on social media this Tuesday and share prayers this whole past week for the lives lost in the West.

Sara’s post came at the heels of the death of the pregnant elephant in Kerala who died after consuming a fruit laced with firecrackers. True that Sara’s intention was to grab attention for the poor animal so that its perpetrators were penalised but that way she went all extra about it poked the already fuming netizens. Sara’s post, hands down, reeked of privilege and the haste and desperation to jump the bandwagon of the new ‘woke’ but it backfired. 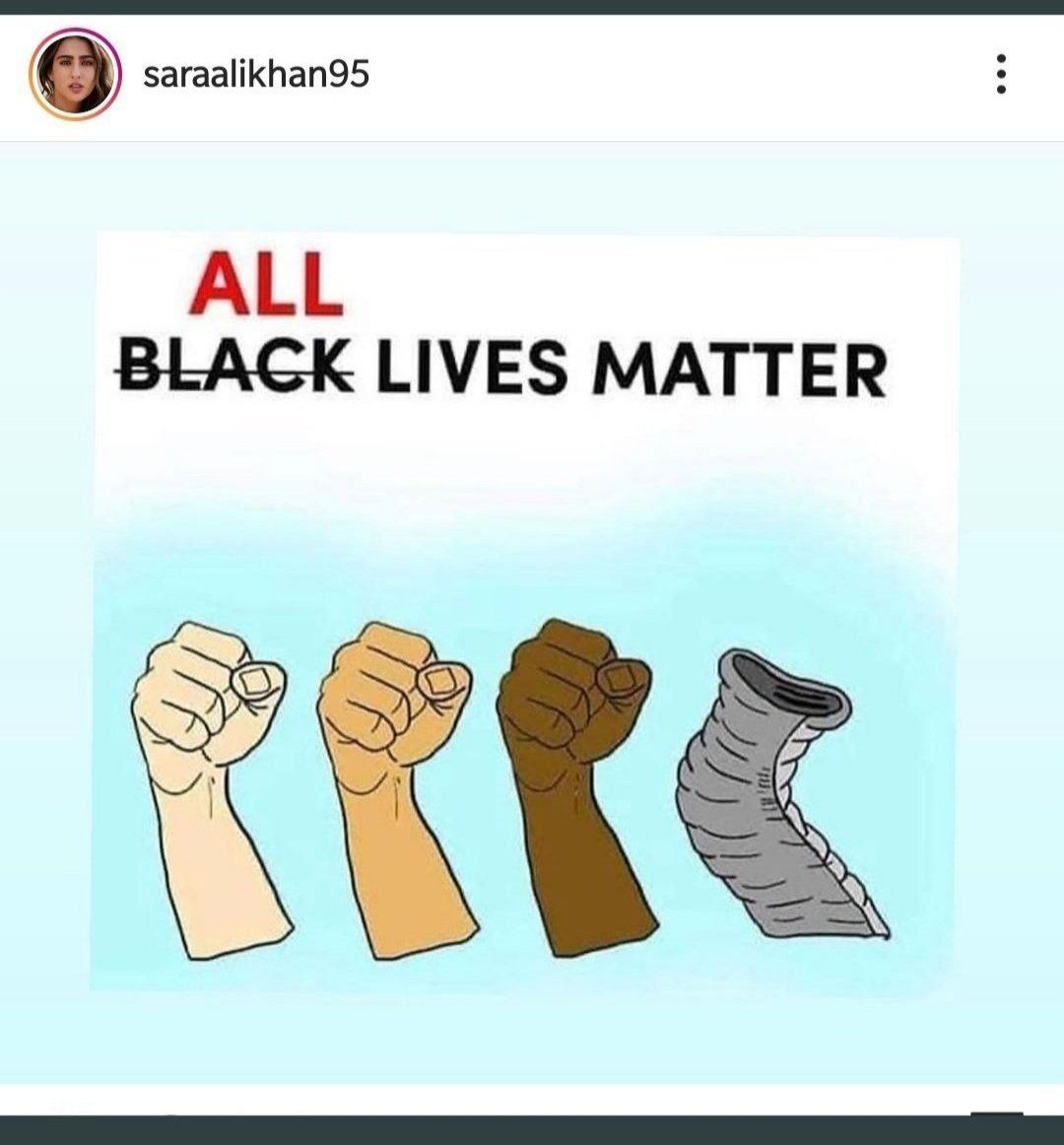 Zoya Akhtar had just started the streak of #MinorityLivesMatter and Abhay Deol too had saved the grace for the follies of his colleagues when he pointed out, “Now that “woke” Indian celebrities and the middle class stands in solidarity with fighting systemic racism in America, perhaps they’d see how it manifests in their own backyard? (sic)” but Sara’s post undid all their hard work.

Maybe it’s time for these now? Now that “woke” indian celebrities and the middle class stand in solidarity with fighting systemic racism in America, perhaps they’d see how it manifests in their own backyard? America has exported violence to the world, they have made it a more dangerous place, it was but inevitable that it would come back karmically. I’m not saying they deserve it, I’m saying look at the picture in it’s totality. I’m saying support them by calling out the systemic problems in your own country, because they turn out to be one and the same thing. I’m saying follow their lead but not their actions. Create your own actions, your own movement, relevant to your own country. That is what the black lives matter movement is all about! In the larger picture, there is no “us” and “them”. There is not a country that’s real. But a planet in peril. #migrantlivesmatter #minoritylivesmatter #poorlivesmatter Black Lives Matter (find out why not to use the hashtag and still support the movement).

While there were other celebrities as well who supported #AllLivesMatter including Kareena Kapoor Khan but discrediting it the way Sara did – by striking off ‘Black’ in a placard and replacing it with ‘All’, despite having a history and political science degree from Columbia speaks volumes about her blind privilege. Yes, we know that all lives of humans, animals, and birds matter but not all have suffered discrimination under race as the Blacks did. No one said that “only” black lives matter or “only” minority lives matter. Yet invalidating the ones who have suffered centuries of abuse and discrimination by sweeping it under a single carpet of #AllLivesMatter is sheer ignorance.

Sincere and strong-minded, the last thing we expected from a promising young voice like Sara Ali Khan was pulling down her post after severe backlash and moving on without an apology or acceptance of failing to understand a sensitive matter. Sara always radiated nice energy and has won our love and respect in the past but sneakily deleting the post due to the poor strategy of her social media handling team or her own lack of basic conscience, definitely lost her a few fans that rooted for her intellectual charms.