Is the White Tiger back? A Tiger mauls old man to death near Bandhavgarh Reserve in Madhya Pradesh

A tiger mauled an old man to death in the jungle of Pathari village under the Ghamokhar range of the Bandhavgarh Tiger Reserve near here, police said. 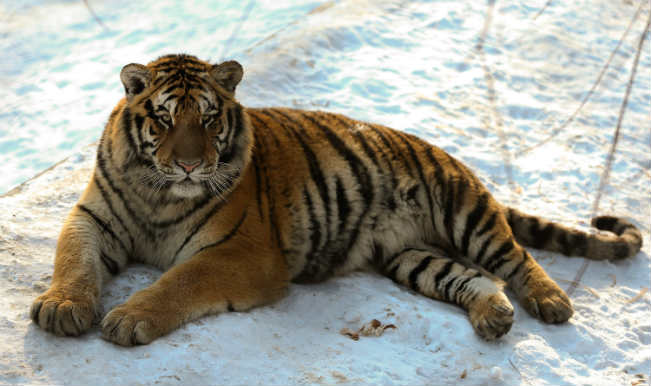 Also Read - Love Jihad Will Not Be Allowed In Madhya Pradesh At Any Cost, Says CM Shivraj Singh Chouhan | WATCH

Umaria (MP), Mar 2: A tiger mauled an old man to death in the jungle of Pathari village under the Ghamokhar range of the Bandhavgarh Tiger Reserve near here, police said. Also Read - Labrador to Undergo DNA Test to Settle Ownership Dispute in Madhya Pradesh's Hoshangabad

Parsadi Yadav (65) took his cattle for grazing to the jungle yesterday and cried for help at around 4 pm. A boy who heard him as well as 50 villagers went to search for him but after they heard the big cat’s roar, they returned, Parsadi Yadav’s brother Mathura Prasad Yadav told PTI. Also Read - First Meeting of Madhya Pradesh Government’s ‘Cow Cabinet’ To Be Held Today

They searched for Parsadi Yadav in the night and found his half-eaten body at around 10 am today, he said. Forest and police officials reached the spot and recovered Parsadi’s body. After postmortem, the body has been handed over to family members, Manpura police station investigating officer Ram Gopal Mishra said.

He said that Parsadi’s body had marks which indicated that he had been mauled to death by a tiger. The police has registered a case and further investigations are on, he said.
Meanwhile, forest officials handed over Rs 15,000 as initial compensation to family members of the deceased.