Top 10 Bollywood Songs RAW should use to torture Islamic terrorists!

The CIA uses a technique called ‘sound disorientation’ to torture terrorists. We decided to help out RAW by compiling a list of Bollywood songs that have tortured us. 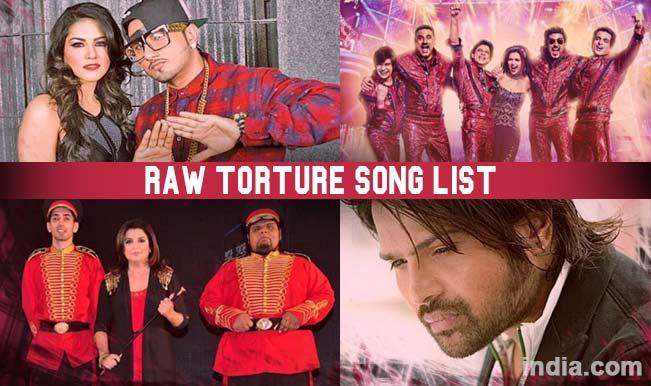 The CIA uses a technique called ‘sound disorientation’ to torture terrorists. Their list included Eminem’s The Real Slim Shady, The Bee Gees’s Staying Alive and Metallica’s Enter Sandman. We decided to help out RAW by compiling a list of Bollywood songs that have tortured us. Here are the 10 songs that would break any hardcore Islamic terrorist (with inputs by torture song specialist Anagat Chowdhary). Note to RAW: For full impact, the songs should be played along with their videos on a huge screen! Also Read - Kangana Ranaut Talks About Sunny Leone, Soft Porn, Urmila Matondkar, And Fake Feminists in One Tweet

While any Himesh Reshammiya song could’ve made the cut, Tera Surroor is really his magnum opus. The nasal twang, the never-ending beginning and the ‘hero’ stealing the terrorists’ hipster look will hit where it really hurts. Play this on loop, and it will break the strongest hardliner in a day!

The song has everything that will hurt Islamic terrorists – a scantily-clad ex-porn star in Sunny Leone, constant references to alcohol and never-ending Yo Yo Honey Singh. While this might have been a big hit in Gurgaon, it definitely won’t go down well with the believers.

The Khan Siblings – Farah and Sajid – have taken it upon themselves to torture this nation with insane movies and it’s time we used their considerable skills to hurt our enemies. Nothing does that better than the nonsensical 2013 IPL theme track called Jumping Jhapak. It will also remind them India continually whips Pakistan’s ass at cricket and that Pakistani players weren’t allowed to play in the IPL!

Main Ladki Pom Pom from Hera Pheri has such a bizarre premise along with a song and dance sequence that makes you say – What the F@#k! Let’s just say that the words to describe this song haven’t been invented yet. Oh, and what the hell is Tabu wearing in this? What the F@#k!

I love my India (Pardes)

The CIA commonly used extremely American songs like Born in the USA to break down detainees and shove patriotism down their throats and we can do the same with this insanely patriotic number.

DDLJ recently completed 1,000 weeks at the Maratha Mandir and the entire film’s premise can be captured in this one song. The Shah Rukh Khan-Kajol hug is surely going to send a shiver down the spines of heavenly virgin seekers! Also, it would be a nice way to introduce the concept of a woman’s free will to the terrorists and the Taliban, wouldn’t it?

The CIA often used the Meow Mix advert from 1984 on an infinite loop to break the hardest terrorists and we can do the same with the annoying Honey Bunny song from the Idea ads. The repetitive lyrics have a way of getting stuck in your head and haunting you for all eternity.

Forget jailing them for AK-47s or footpath misdemeanour, the actors involved in this song – Salman Khan, Sanjay Dutt, Ajay Devgn and Sonakshi Sinha – deserve a life-sentence for torturing us with those ‘dance’ moves. What were the lyricist (Shabbir Ahmad), choreographers or even the actors thinking? Or music director Himesh Reshammiya?

If she hadn’t become a choreographer-director, Farah Khan would’ve made an excellent interrogator or torturer. Career choices aside, Nonsense Ki Night epitomises Happy New Year, which in turn is an indication of the constant dumbing down of humanity. A nonsensical song, in a nonsensical movie about the stupidest con job of all time, Nonsense Ki Night will make hard men crumble.

And we finally end up with a song, in which the director or choreographer thought it was a good idea to let Bhai drive a bus! The song should also hurt the anti-Western education terrorists, with its constant repetition of the English alphabet, which we all know is the devil’s work!

If none of the aforementioned songs work (which is just not feasible, but still) they can play the underground hit called G#@#@ Mein Danda! If that song doesn’t work against terrorists, nothing ever will!