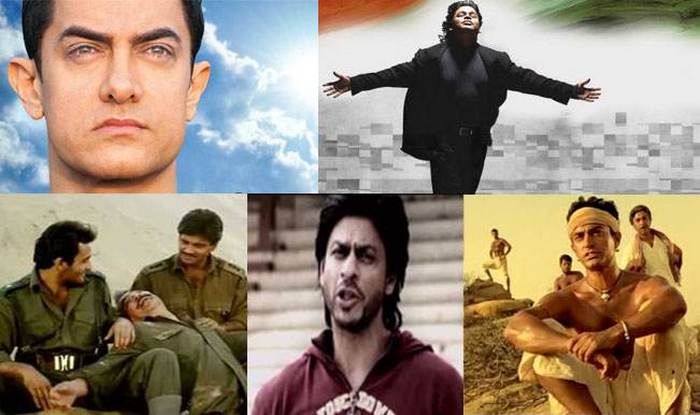 Republic Day 2017 or the 68th Republic Day of India is around the corner and you will soon start hearing the familiar classic patriotic songs on radio, television and in neighbourhood homes. But there are a lot of new, modern patriotic songs – from movies like Shah Rukh Khan‘s Chak De! India and Swades, Hrithik Roshan’s Mission Kashmir and Lakshya to Aamir Khan‘s Rang De Basanti and Sarfarosh and his television show Satyamev Jayate‘s title song, and albums like Oscar Award-winning composer AR Rahman’s Vande Mataram – in the last two decades, which are often overshadowed by the unforgettable patriotic songs that have an independence struggle hangover. Also Read - Akshay Kumar Gets Republic Day 2022 For Bachchan Pandey's Release

Here’s a jukebox of some of the new age patriotic songs for the young crowd of India, many of whom are part of the new political revolution in India. Coincidentally, many numbers have been composed by maestro A R Rahman who himself is a symbol of communal harmony in India. Happy Republic Day 2017! Also Read - Conspiracy Afoot to Kill 4 of us on Republic Day, Allege Protesting Farmers

1. Zindagi Maut Na Ban Jaye – Sarfarosh: This Sonu Nigam number is soulful and was very apt for the Aamir Khan movie that dealt with terrorism. 17 things India must get freedom from.

3. Bharat Humko Jaan – Roja: The Kashmir issue was tackled in this Mani Ratnam film. A young couple from south India goes for a honeymoon and the groom is kidnapped by jihadis. This song truly epitomises the spirit of the movie.

4. Bombay Theme – Bombay: The Mani Ratnam movie was about the 1992-93 communal riots in Bombay, and this instrumental theme although dedicated to Mumbai reverberated in the entire country.

5. Aisa Des Hai Mera – Veer-Zaara: It was a romantic movie set in the olden times, about cross-border love between an Indian boy (Shah Rukh Khan) and Pakistani girl (Preity Zinta). This lovely patriotic song is when the boy is singing paeans to his country, and the girl points out that both their countries are similar. ‘Tere des ko maine dekha tere des ko maine jaana, Jaane kyun ye lagta hai mujhko jaana pehchaana’, she replies to him. He agrees ‘Aisa des hain mera ho, jaise des hain tera’. The lovers compare their respective countries in a positive way promoting harmony.

6. Satyamev Jayate – Satyamev Jayate TV show: Aamir Khan’s first TV show made an impression even before its premiere thanks to the patriotic song composed by Ram Sampath and written by adman and ace lyricist Prasoon Joshi. Satyamev Jayate was on ringtones soon after. Take a look.

8. Chale Chalo – Lagaan: It’s a highly motivational song, as the village bumpkins who have never played cricket prepare for a face-off with the colonial English to beat them in their own game – of cricket.

9. Kuch Kariya – Chak De! India title song: When we saw this song for the first time, we thought it was just a catchy number with a long-haired Shahrukh and his swagger in a hockey stadium. But when we saw the movie, the entire nation including us went berserk and realised the importance of this theme song in the film. Ever since, whenever India wins a match or a game in any sport, Kuch Kariya is sure to be played!

10. Yeh Jo Des Hai Tera – Swades: Starting with a shehnai-like instrument, nobody expected this A R Rahman song to be so good. It grows on you slowly and kills you. Very apt for a movie like Swades.

11. Des Rangeela – Fanaa: This peppy patriotic song has a blind Zuni (Kajol) performing to it in a wonderfully choreographed sequence. The movie it is based in, Fanaa, was about the tussle between patriotism and love, with Aamir Khan playing an Indian army soldier who’s a traitor.

13. Rind Posh Maal – Mission Kashmir: This lovely song rendered by Shankar Mahadevan is actually a version of an original Kashmiri song that promotes brotherhood and peace of mind through music.

14. Desh Mere Desh Mere – The Legend of Bhagat Singh: Mellifluous and smooth, this A R Rahman and Sukhwinder Singh song really sets you in the mood.

15. Sandese Aate Hai  – Border: This song was very popular but it is not just a patriotic but a romantic song for the soldier calling out to his lover and one where he is missing his village and his family. A tear-jerker.

16. Luka Chuppi (Mother’s ode) – Rang De Basanti: This heart-rending number from Rang De Basanti will bring a tear to your eye both musically and visually. It’s a mother’s ode to a pilot son who dies on duty. This is A R Rahman, Lata Mangeshkar and Prasoon Joshi at their best. Must watch!

18. Phir Bhi Dil Hai Hindustani title song: A Shah Rukh Khan movie ahead of its times and a patriotic number, bordering on jingoism, also ahead of the times.

19. Lakshya title song: Boy, did we love this coming-of-age story of Hrithik Roshan, directed by Farhan Akhtar. And this song was perfect to depict his state of mind.

20. Mangal Pandey – Title song: This Aamir Khan movie was a flop but the song by Kailash Kher caught on with its drums and catchy tune. It was a tribute to Mangal Pandey, the first Indian revolutionary of the 1857 Sepoy Mutiny or the Uprising of 1857. The song that shows Mangal’s walk to the gallows and his hanging and the aftermath has been shot very well. And Aamir’s expressions as Mangal look incredible. Check it out!