Trending News Today May 09, 2020: ‘Made by Jains on Orders, no Muslim Staffs’: Chennai Bakery Draws Flak For Its Islamophobic Poster

Jain Bakeries & Confectioneries in T Nagar of Chennai criticised for stigmatising Muslims in its WhatsApp poster, netizens call for social boycott of the establishment

The hyperbole of communal hatred in India continues to swell amid COVID-19 pandemic and the recent initiator of it is Jain Bakeries & Confectioneries in T Nagar of Chennai which openly ostracised Muslims in WhatsApp poster. Asserting that the food in the bakery was “made by Jains on orders, no Muslim staffs”, the poster drew flak for its attempt to stigmatize a community. Also Read - Coronavirus: Delhi Records Highest Single-day Spike of 1295 Fresh Cases, Total Tally at 19,844

Leading to an outrage on social media, the enraged people called for a social boycott of the bakery. While one user wrote, “All of us shall have to unite & call for total social boycott of this establishment Jain Bakeries& Confectioneries for the their open communal bias shown against Muslims”, another pointed out, “It is really funny how those who say, pure veg – no muslims , never say no Muslim customers and no Muslim money or no Muslim donations. Come to think of it I don’t think I have ever come across anyone refusing to take money from a Muslim client. If I were to call this establishment now and ordered 20 kilos of each of these goodies and then gave a Muslim name, what is the bet that they will still fall all over themselves to serve me?” and yet another wrote, “Things are crossing a limit now.” Also Read - Google Provides Easy Access to Mental Health Amid COVID-19, Offers Self-Assessment Test to Fight Anxiety 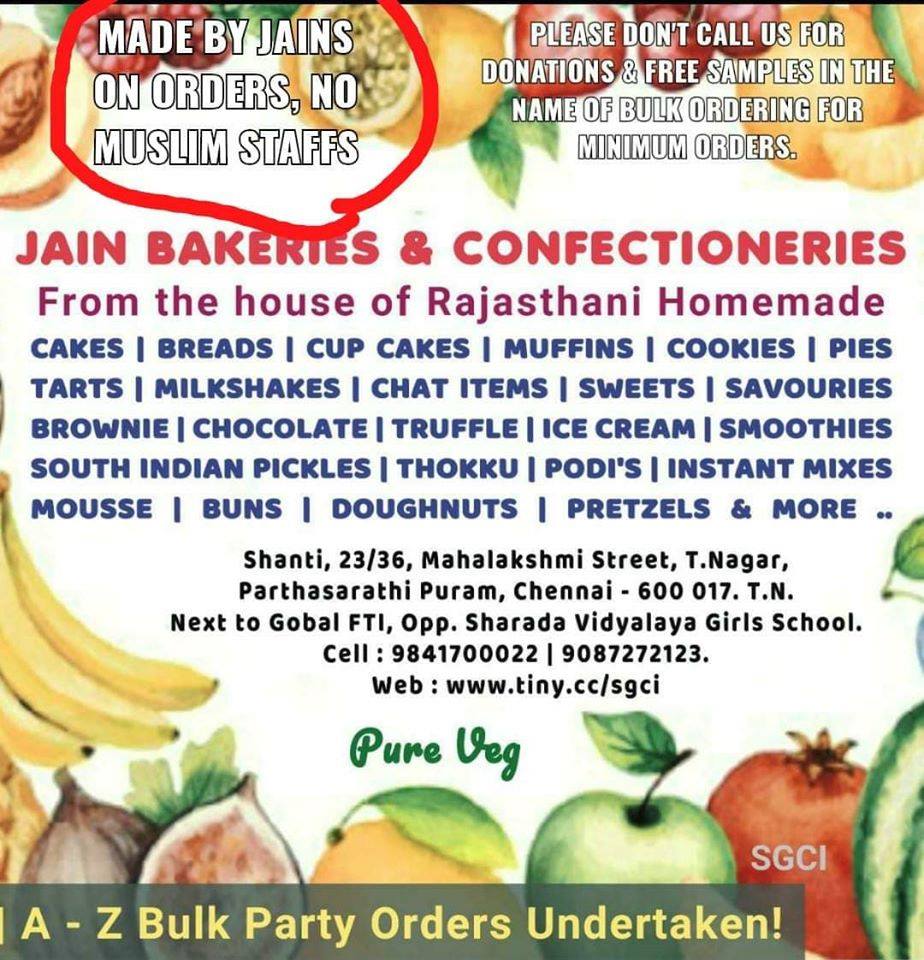 In an interview with TOI, senior advocate A Sirajudeen opined, “The claim by the bakery that they did not employ Muslims to prepare food will incite people. Avoiding a minority community in social and business spheres infringed on their right to equality and affected religious harmony. The publisher of the advertisement is liable for prosecution under Sections 153 (provocation to cause riot), 153A, 505 (inciting commission of offence against another community) and 295A (insult a class of people) IPC.”

In their defense, Rakesh of Jain Bakeries and Confectioneries told the daily that done so only in response to an earlier message circulated on WhatsApp by Sowcarpet that urged people to not buy goods from shops that employeed Muslims. He said, “A Whatsapp message that originated from Sowcarpet urged people not to buy bakery products from shops in the area as they employed Muslims. As we were receiving calls continuously, we decided to clarify. Our intention was only to keep our customer base intact and not to oppose any religion, as Muslims are also our customers.”