On March 23, India celebrates Shaheed Diwas to commemorate the sacrifice made by them and acknowledge their invaluable contribution to India’s independence from the British colonial rule.

That’s why, every year, on March 23, India celebrates Shaheed Diwas to commemorate the sacrifice made by them and acknowledge their invaluable contribution to India’s independence from the British colonial rule. Also Read - Bhagat Singh Quotes: Remembering the martyr on Shaheed Diwas 2017

All about that day

The 3 revolutionary heroes were hanged by the British Government for their alleged involvement in the killing of John Saunders. However, the trio confused Saunders with James Scott, another British police officer who was believed to have thrashed Lala Lajpat Rai during a lathi charge in October 1928.

After shooting Saunders, the freedom fighters carried a bomb explosion in the Central Legislative Assembly and fled away following which an intensive search operation was carried out to arrest them.

The famous quote of, ‘To make the deaf hear, a loud noise  (like a bomb) is needed’ was then penned by Bhagat Singh when he was arrested. Bhagat Singh along with Sukhdev and Rajguru was hanged on March 23, 1931 at 7.30 pm by a judge who signed death warrants of the three freedom fighters as their original warrants had expired.

Here is the warrant: 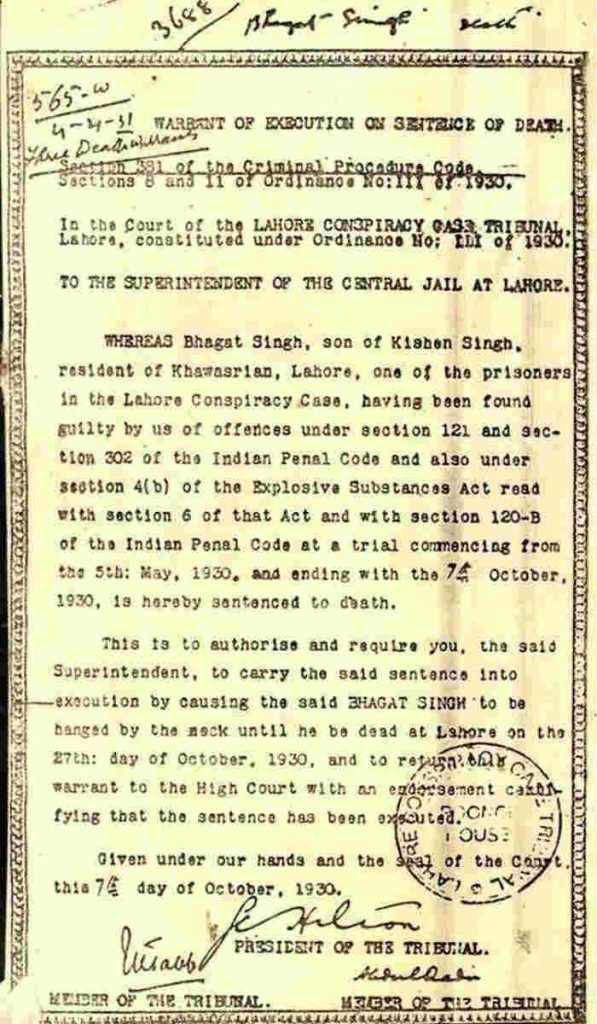 After the hanging, which saw thousands of supporters swarming the jail on the hanging date, the jail authorities broke the real wall of the jail and then cremated their bodies secretly outside Ganda Singh Wala village.

Twitter is flooded with messages of patriotism with ‘Shaheed Diwas’ and ‘Bhagat Singh’ becoming the top trends. PM Modi too paid tributes to the trio and tweeted that the nation will forever remember their sacrifices:

Bhagat Singh, Sukhdev & Rajguru sacrificed their lives for our Motherland, you can at least Stay Home! pic.twitter.com/n5YnE1QfQs

#Bhagatsingh was a well read revolutionary who believed that the sword of revolution is sharpened on the whetting stone of ideas. Salutations to my favourite hero. pic.twitter.com/VmPrzG4GTy

Revolutionary Salute to our brave Comrades Bhagat Singh, Rajguru & Sukhdev.
Your name is enough to give goosebump to many
🙏🙏🙏#bhagatsingh #ShaheedDiwas pic.twitter.com/YslTx6LFka

It is easy to kill individuals but you can not kill the ideas. 🙏🏻🙏🏻#bhagatsingh #ShaheedDiwas pic.twitter.com/uQrmzb2DJp

On the 89th death anniversary, let’s take a moment to remember them today and be thankful for our freedom!