Pakistani actor Mawra Hocane was present on a chat show with her sister when she talked about the causes of mental illness and said nothing but 'food' is responsible for having depression. Twitter schools her.

Pakistani actor Mawra Hocane, who also made a foray in Bollywood with a film titled Sanam Teri Kasam in 2016, has put the social media on fire with her recent statements on mental illness. She, along with her sister Urwa Hocane, appeared on Pakistan’s morning show where they talked about the importance of eating right and causes of mental illness. While encouraging people to have a healthy diet, regular exercise, and stress-free living, the sisters said something that didn’t go down well with many people on social media. The Hocane-sisters said that ‘food’ is the ‘only’ reason behind depression in human beings. Also Read - 'Emotional Distress, Panic & Anxiety': What 21 Days of Nationwide Lockdown Would Bring

Mawra said, “These days there are so many problems about depression, mental disease, it’s all because of food. There is no other reason.” Now, people on the internet have schooled the actor over her ignorant comment on mental illness. Many have taken to Twitter to tell Mawra that having unhealthy food is not the ‘only’ reason behind depression and anxiety which is triggered by many other things and sometimes, due to a combination of various factors. Trauma, life history, genetics, lack of sleep, abuse, a set type of medication, substance abuse, personal loss, and serious illness are a few among other reasons that are known to trigger anxiety or depression in a person. Having an unhealthy diet adds up to the stigma in a major way. This is something that people tweeted about while addressing the entire Mawra-mental illness controversy on Twitter. Check out these tweets: Also Read - Obese Kids More Exposed to Anxiety And Depression - Read The Report

Urwa and Mawra’s comments belittling mental health were problematic af but they are simply reflective of our general attitude.

As a general rule of thumb, it is never wise to talk about something authoritatively that you have not experienced yourself.

You cannot go and say this stuff. Even if you’re well-meaning and wanted to warn people about junk food and promote healthy eating.

Junk food is not what causes depression ffs.

Height of ignorance. Depression and other mental illnesses have several causes, such as trauma, genetics, environmental triggers etc. What you eat is NOT the only thing that causes Depression. Urwa and Mawra, please do your research before saying such statements https://t.co/MS6w0Y0zGn

“iTs aLl bEcaUse oF foOD” pic.twitter.com/niq0dnSfbb

While food is a serious ingredient in effecting your physical and mental health, it is certainly not the sole reason for depression. Depression is an acute disease which plays havoc with lives.

It’s however interesting to see that Mawra doesn’t believe in all these facts. She took to her Twitter to make a tweet that seemed like a jibe on people criticising her for her statement. She shared a tweet by popular author Paulo Coelho:

Later, she took to her Instagram stories to share a few screenshots explaining how food is one of the reasons that makes the person suffer depression. What she failed to realise is that food is just one of the many aspects and not the ‘only’ reason. Check these: 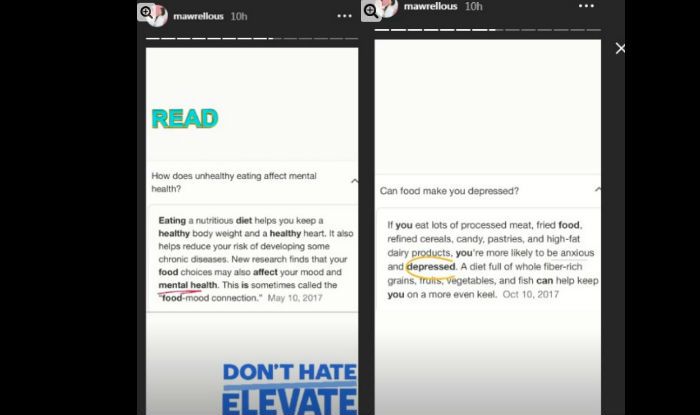 While Mawra is defending her stance on the matter, her sister Urwa has chosen to remain silent.