It is important for the brand to take the necessary measures to keep the quality of the product as the biggest priority.

Setting up a good example of keeping the consumer’s concern as priority, Tropicana India very well responded to their one of million buyers. Recently, when Vishwas Rai’s horrifying experience with the Tropicana fruit juice was reported by India.com and shared, the brand ensured to take the matter as top priority. Rai posted the disturbing tale of finding lumpish, black fungus in the tetra pack of Tropicana Mixed Fruit Juice on Facebook. Taking a note of the seriousness of the incident, PepsiCo owned Tropicana India made an apt reply that included not only reaching out to the customer but also ensuring detailed investigation. Also Read: Dust particles found in Amul Milk: Amul blames third party distributors for adulteration.  Also Read - Tropicana Mixed Fruit juice contains fungus! Consumer posts disgusting pictures on Facebook

Thank you for alerting us on this. Taking serious note of this issue, we immediately reached out to Vishwas as soon as we received the complaint and are in regular touch with him. We also checked the control sample of the same batch which showed no quality issues.

It is important to note though that any fruit juice when exposed under certain circumstances to air develops mould.

However, we will be able to ascertain the actual cause only after a detailed investigation, for which we need to inspect the pack. Our teams have reiterated this in their discussion with Vishwas and we need his cooperation to hand over the pack for further investigation.

We wish to assure you that consumer safety is paramount to PepsiCo and we are committed to finding out the root cause. 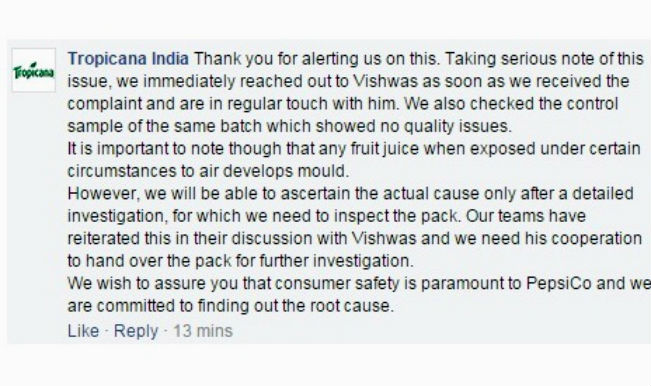 It is important for the brand to take the necessary measures to keep the quality of the product as the biggest priority. At the same time, when the brand reaches out to their customer in case of a slip up is also an important way to regain the trust. Tropicana India has done well to reach out to Vishwas and done well to acknowledge the grievances of its consumer. In this world of stiff competition, especially with the social media working as a platform for the news to travel at lightning speed, it is important for the brands to keep in touch with their customers at grass root level.