The 'Bhanjana' ritual was performed wherein the 80-year-old groom's party went in a procession to the 76-year-old bride's home on Tuesday at Udaipur.

Love has no age limit and marriages are made in heaven! These two phrases have been proved right by an 80-year-old man who got married to his 76-year-old live-in partner on Tuesday at Pargiyapada village of Madri panchayat in remote Jhadol Phalasiya block of Udaipur. According to TOI report, the couple’s grand and great-grandchildren organized a lavish wedding for their grandparents.Also Read - Udaipur Mall Bans Swiggy & Zomato Delivery Guys From Using Lift, Enraged Twitter Calls it 'Blatant Discrimination'

Son of Deetaram, Devadas Kalasua was already married. But he had eloped with Magdu Bai from a neighbouring village and brought her to his home. And there he used to live with his first wife Champa Bai and children. After that Champa Bai shifted to Phalasiya to live with her sons. But Devadas continued to live with Magdu Bai at his ancestral home. However, both the wives were on talking terms and tolerant. Also Read - 21 Differently-Abled Couples to Tie Knot at Mass Wedding in Udaipur, Will Endorse 'Say No To Dowry' Campaign

As per as the local customs their relationship had not gained social acceptance ‘Nyayvata’ and thus, the couple’s sons initiated for the rituals by making a proposal to their mother’s relatives back in her village. And the other party have accepted the proposal. Also Read - 'Maine Insaani Farz Nibhaya': Man Breaks His First Roza of Ramzan To Donate Plasma For 2 Covid Patients 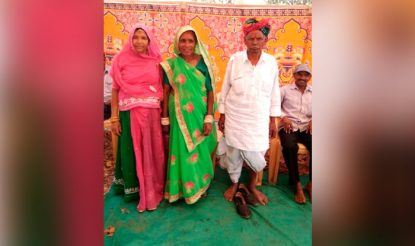 Arjunlal, Devadas’ s son who is a schoolteacher, said that his parents had been longing for social acceptance of their relation.

However, until the customs were observed with mutual consent between the two parties and the panchayat members the community didn’t recognize such relationship. Devadas’s first wife initiated the rituals and gave her consent. However, the family members said she couldn’t take part in the ceremony because of ill health.