The huge body of the fish has a mix of silvery and bright reddish-orange scales, dotted with white spots. Its large eyes feature hints of gold.

Oregon: In an extremely rare occurrence, a large fish called Opah, washed ashore the coast of the US state of Oregon recently, pictures of which have intrigued social media users. The 3.5-foot-long glistening fish, also known as a moonfish, was found on Sunset Beach last Wednesday, to the surprise of locals. The huge body of the fish has a mix of silvery and bright reddish-orange scales, dotted with white spots. Its large eyes feature hints of gold.  Also Read - Fisherman Catches Extremely Rare Blue Lobster, Releases it Back Into Ocean | See Pics

The fish is ‘rare to the Oregon Coast,’ Seaside Aquarium said in a Facebook post along with several images of the mysterious fish. Tiffany Boothe, assistant manager at the aquarium in the small beach community of Seaside, said it’s the first opah fish she has seen on area beaches.

“It created quite the stir at the Aquarium where folks were encouraged to come take a look at this beautiful and odd looking fish,” the aquarium wrote.

Keith Chandler, the general manager of Seaside Aquarium, told CNN that they are unsure how the Opah died, but he estimates that the fish had been on the beach for less than an hour before aquarium officials recovered it.

“They’re pretty cool fish, and we don’t normally see them on the shore,” said Chandler.

The aquarium officials also informed that the fish will be frozen for educational purposes until the school year starts. Partnering with the Columbia River Maritime Museum’s educational director, Nate Sandel, one lucky school group will get the chance to dissect this large fish. 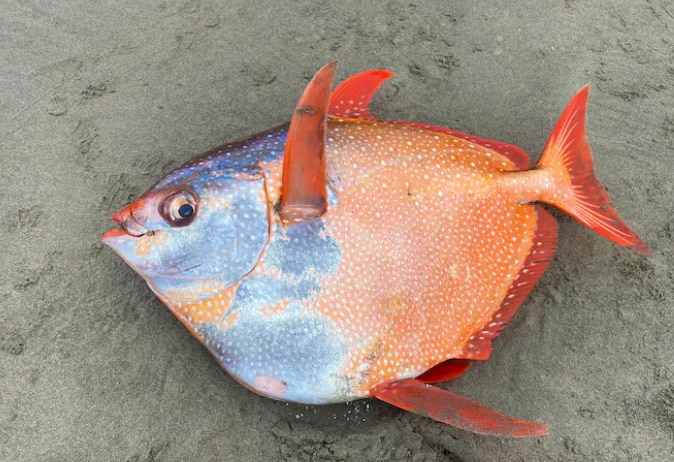 Opahs can grow to over 6 feet and weigh over 600 pounds. According to National Oceanic and Atmospheric Administration, they are found in tropical and temperate waters, including the Pacific islands and the United States’ West Coast, Southeast, New England and Mid-Atlantic regions.

According to the agency, much remains unknown about the fish, including its average life span: “Little research on the basic biology and ecology of opah has been conducted.”