Uttar Pradesh CM Yogi Adityanath’s ‘Gullu’ Is An Internet Sensation. Have You Seen Pics Yet?

Sources in the temple complex said that Yogi Adityanath was very fond of Gullu and the latter always rushed to meet the Chief Minister whenever he came to the temple.

Gorakhpur: Uttar Pradesh Chief Minister Yogi Adityanath’s new pet dog ‘Gullu’ has become an Internet sensation, hours after his photographs went viral on social media. The CM, on Sunday, offered prayers at the Gorakhnath temple and when he came out, Gullu, a black Labrador pup, rushed out to greet him. The CM fondled the pup and fed him biscuits while those present in the temple complex clicked pictures.Also Read - 26 Killed as Tractor Trolley Falls Into Pond in UP's Kanpur; PM Modi Announces Ex-gratia of Rs 2 Lakhs 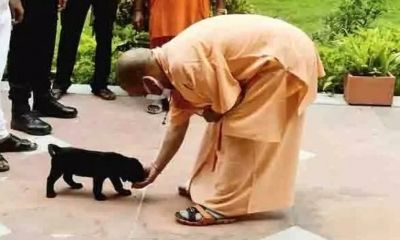 Kalu was brought to the Goraksh temple in December 2016 and Yogi Adityanath became Chief Minister three months later in March 2017. Yogi earlier had a dog named Raja Babu which had died and he (Yogi) was rather disturbed after that. “This black dog was gifted to Yogi ji in Delhi by a temple devotee. For some time, Kalu remained in Delhi and was then brought to Gorakhpur,” said a temple source.

(Based on IANS inputs)