Overwhelmed by all the appreciation and positive comments, the air hostess has now thanked all the viewers for watching her dance video.

Viral Video: The soulful Manike Mage Hithe sung by Sri Lankan singer Yohani Diloka De Silva has become the new viral rage online, and continues to create waves in both Sri Lanka and India. Recently, an air hostess from IndiGo Airlines went crazy viral online after her dance on Manike Mage Hithe was immensely loved by viewers and raked over 60 million views on Instagram. Overwhelmed by all the appreciation and positive comments, the air hostess has now thanked all the viewers for watching her dance video.Also Read - Viral Video: IndiGo Air Hostess Dances to Manike Mage Hithe on Empty Flight, People Love It | Watch

Aayat shared a video thanking everyone for the overwhelming response. “I still can’t describe this feeling in words.. lafz kam hain shukriya kehne ke liye aap sabhi ko. Thank you so much each and everyone.. I just want to be the reason behind your smile! and make you proud (sic),” the video caption read. In the post, she shared the video of her dancing once again to Manike Mage Hithe, along with her reaction to its success.

Her video response too has amassed massive views and around 899,065 likes, with encouraging comments. Many congratulated for going viral, and dropped heart and fire emojis in the comments section. 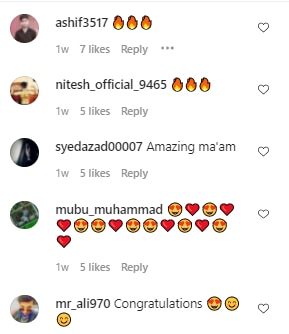 A few weeks back,  the airhostess identified as Aayat Urf Afreen, danced to the viral song in the aisle on the flight during a halt. As the flight was vacant, Aayat took advantage of this golden opportunity and put on an adorable dance performance with amazing expressions while her colleague recorded her video.

Apart from working as an air hostess for IndiGo Airlines, her Instagram bio describes her as an entrepreneur, stewardess, a ‘monotheist’ and also a content creator. Aayat also has a YouTube channel called ‘Life camera Aafreeeen!’ On Instagram, she has 402 K followers.