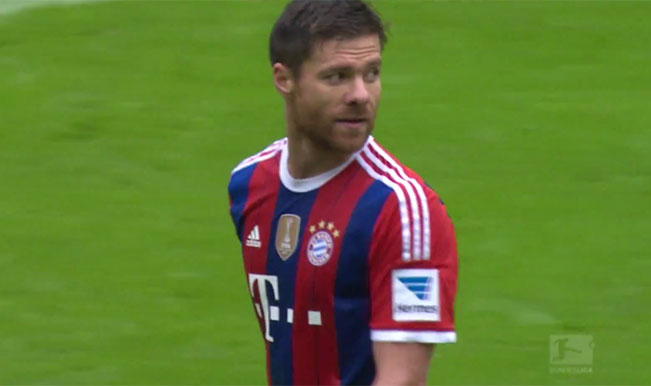 Spanish footballer Xabi Alonso has garnered reputation for his exceptional vision of play, long range passing as well as scoring from his team’s own half. The 2005 Champions League winner with Liverpool moved to Germany in the previous transfer window to play for Pep Guardiola’s Bayern Munich. Also Read - Bayern Munich Will Not be Pursuing Barcelona Captain Lionel Messi: Report

The 32-year-old became an instant hit at the Allianz Arena, grabbing the Man of the Match award five times and also breaking two records in the Bundesliga against FC Koln; one for most touches in a game (206) and the second for most successful passes (196). The two-time European champion once again proved to his former employers Real Madrid that they were too stupid to sell him as Bayern trumped Hannover 96 4-0 last Saturday. Also Read - Twitter Reactions: Fans go Berserk as Bayern Match Barcelona's Record Feat of Sextuple After Winning Club World Cup

With the reigning German champions leading 2-0, Alonso saw the Hannover goalkeeper Robert Ron-Zieler way off his line and attempted his trademark shot from inside his own half. But the German international was quick to move back and parry the shot over the crossbar. Also Read - Jerome Boateng Leaves Bayern Squad as Ex-Girlfriend Kasia Lenhardt Found Dead a Week After Breakup

Alonso had twice scored from his own half during his Liverpool days against Newcastle United and Luton Town. Last month, Moritz Stoppelkamp of Paderborn set a new record in the Bundesliga by scoring from 82 metres. Wonder if Xabi Alonso is just warming up to beat the 27-year-old German’s record and score from 83 metres or more!