The condition that the calf suffers with is called Dicephalic Parapagus, which affects just one in every 100,000 cows.

Paarasalai: Villagers in Kerala’s Paarasalla village were in for the shock of their lives after a farmer’s cow gave birth to a calf with conjoined heads last week. Not just that, the calf had four eyes, two mouths, and a pair of ears. Also Read - Shocking Video | Elephant Calf Hit by Train Writhes in Pain

As expected, the mutant calf quickly became the centre of attraction, and people from neighbouring villages thronged the farm to catch a glimpse of the rare calf. Also Read - 'Sex-Sorted Semen' Technology to be Introduced For Cows to Enhance Female Calf Birth: Giriraj Singh

Meanwhile, the birth defect that the calf suffers with, has caused a lot of problems for the little creature. Since the calf has two tongues, it is unable to drink milk naturally, so the farmer has to feed him milk from a bottle each day. 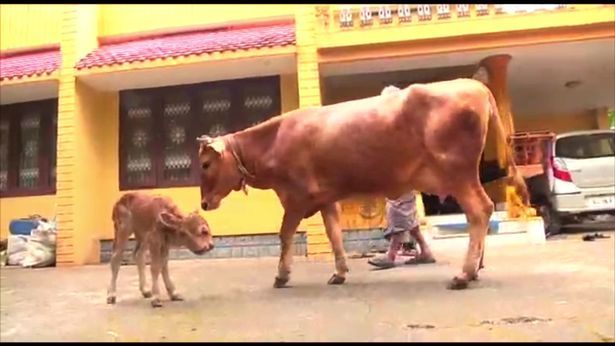 The condition that the calf suffers with is called Dicephalic Parapagus, which affects just one in every 100,000 cows.

The unusual birth defect is found in a wide variety of species including bulls, sharks, turtles and prawns and very common amongst snakes that cause them to be born with multiple heads.

As per studies, animals born with Dicephalic Parapagus have low survival rates and only a very small number are known to have reached adulthood.

However, at present, both the cow and calf are stable and we hope that the calf survives against the odds.