IQ Test: Guess Who Murdered This Woman And Prove You’re As Smart As Sherlock

Can you solve this murder mystery and prove you’re as smart as Sherlock Holmes?

Viral IQ Test Puzzle: If you’ve ever seen the famous BBC series Sherlock which had famous actor Benedict Cumberbatch as the lead and Martin Freeman as his partner Dr John Watson, you’ve seen how the private detectives solve the most unusual cases that leave people scratching their heads. But the genius detective always manages to solve the case, even if the police are unable to, with his brilliant mind.Also Read - Viral Optical Illusion: Can You Find The 2 Cats Hidden In This Picture Within 30 Seconds?

Can you solve this murder mystery and prove you’re as smart as Sherlock Holmes? It’s not hard as the crimes in the show but not the easiest puzzle either. It is said that the people who guess the killer in under a minute have a high IQ and a sharp eye. Also Read - Viral Video: Artist Creates Optical Illusion With 3D Painting on Tree Trunk, Wows Netizens

CAN YOU GUESS WHICH ONE OF THESE 5 PEOPLE KILLED THE WOMAN ON THE LEFT IN THE ABOVE PICTURE?

The puzzle shows a restaurant where a murder has just been committed and the murderer is still inside at the restaurant. The crime scene is in the bathroom where the victim, a woman, is lying in a pool of blood but hasn’t been discovered yet. You have to analyse the image, find out the clues, and identify which one of the five people, including 4 diners and 1 waiter, killed the woman. Also Read - Optical Illusion IQ Test: Only Highly Intelligent People Can Find Camel Rider in Under 30 Seconds

Here are your 5 suspects:

HERE’S THE SOLUTION TO THE IQ TEST PUZZLE:

If you find the brain teaser trick, here’s the solution. 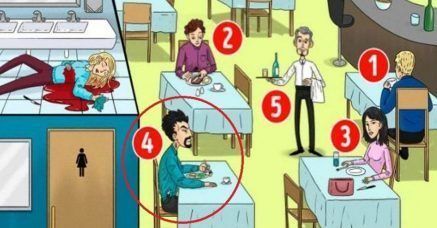 If you look at Suspect Number 4 carefully, there are many clues that are indicating that he is the killer of the woman in the bathroom. The clues that give away he’s the killer are as follows: