The operator of CSP, logged in his account and was shocked to see Rs 52 crore in the available balance ledger. The news spread like wildfire in the area.

Muzaffarpur: Crores of rupees keep pouring into individual bank accounts of people in Bihar these days. The latest incident is from Singari village in Muzaffarpur district. Ram Bahadur Shah, an elderly farmer has received Rs 52 crore in his bank account. The incident came to light on Friday when Shah went to the CSP outlet in Katra to inquire whether the elderly pension was credited to his account or not.Also Read - One Rupee Coin Sold For Rs 10 Crore at Online Auction. Here's Why

The operator of CSP, logged in his account and was shocked to see Rs 52 crore in the available balance ledger. The news spread like wildfire in the area.

“We are poor villagers dependent on farming. We urge the state government to give me some amount so that the rest of my life becomes easy and smooth,” Shah said. 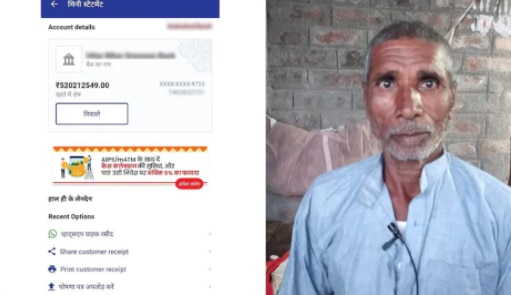 “We have learnt from the local sources that an elderly person has received Rs 52 crore in the bank account. The intimation has been given to senior officials of the district, as well as the concerned bank. The investigation is on,” said Manoj Pandey, sub-inspector of Katra police station.

This is not the first case in Bihar. In fact, two school students of Class 6 of Katihar became millionaires on Thursday. Katihar DM Udayan Mishra however claimed that it was a technical error.

Besides, a person named Ranjit Das of Khagaria district also received Rs 5.5 lakh in the bank account. Das refused to return the amount. He claimed that PM Narendra Modi had promised Rs 15 lakh to every countryman and it was the first instalment. As he did not return the money, the bank had registered an FIR against him. He is currently lodged in jail.