Mohan named his sons after the left ideologies and his first son is named Communism, the second Leninism and the third Socialism. His grandson’s name is Marxism.

Salem: Come Sunday and the city of Salem in Tamil Nadu will witness a unique wedding–that of Mamata Banerjee and Socialism! Confused? Well, in a bizarre wedding invitation that has gone viral, a Tamil Nadu bride named P Mamata Banerjee and groom AM Socialism are all set to tie the knot on June 13. Not just that, the card also mentions the names of the groom’s elder brothers — AM Communism and AM Leninism. In case you are wondering, no, the card is not edited. It’s an actual wedding and the names are real! Also Read - UP Bride Calls Off Wedding After She Saw Her Groom Chewing 'Gutka' During the Ceremony

Notably, the groom A.M Socialism hails from Amani Kondalampatti village in Salem and is the son of A. Mohan, the district secretary of CPI. Mohan named his sons after the left ideologies and his first son is named Communism, the second Leninism and the third Socialism. His grandson’s name is Marxism.

Hailing from the same village is P. Mamata Banerjee who belongs to a Congress family. She was named after the West Bengal CM as her father was impressed by Didi’s firebrand politics as a Congress leader in Bengal.

Here is the wedding card: 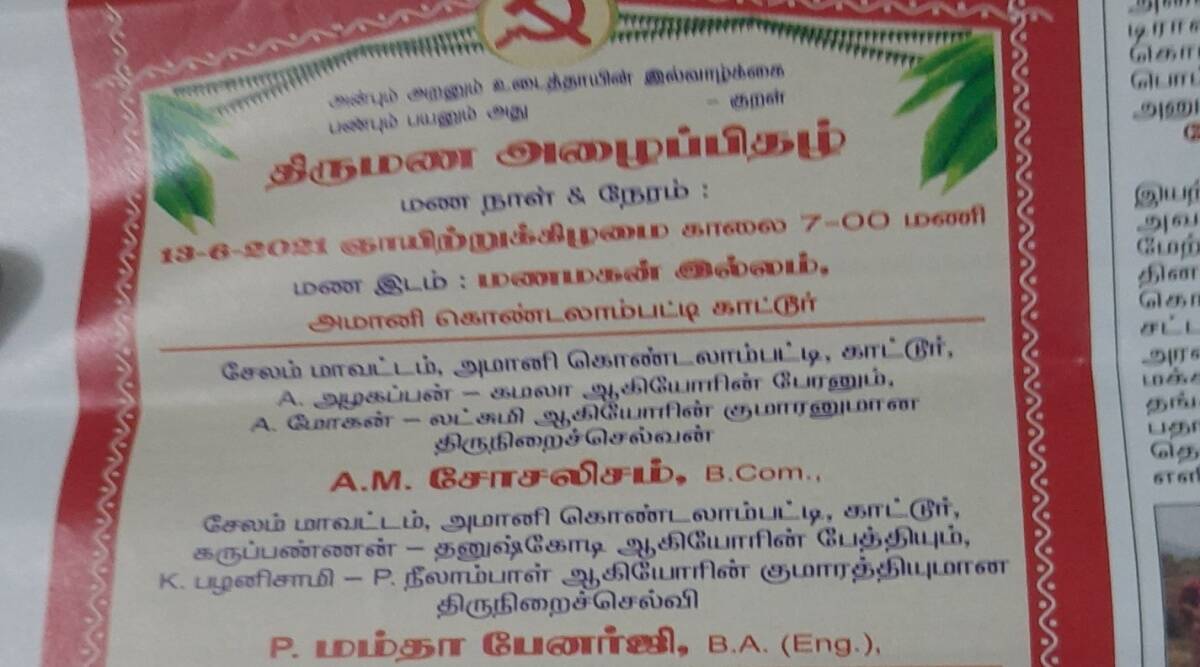 The groom’s father Mohan explained the reasons behind naming his son, and told The Indian Express, “After the Soviet Union was dissolved, people were saying that communism has fallen and the ideology won’t prosper anywhere in the world.  There was a news clip on Doordarshan with regards to this and at that time, my wife gave birth to my elder son. I decided immediately to name him communism as I believed that till the human race exists, communism won’t fall. My second son was named Leninism in memory of Lenin. Communism has to be established for socialism to take shape.”

“In school they used to be ridiculed due to their names but in college their names became quite popular as many students were inclined towards Left ideology,” added Mohan.

Because of Covid-19, the family was unable to invite people to the wedding, so they chose not to print a physical invite. Instead, they published the card in ‘Jana Sakthi’, the Tamil mouthpiece of the CPI, which has gone viral on social media.

It’s going to be a simple wedding and will be held at Mohan’s home on Sunday.