A 77-year-old man named Lalluram came up with a brilliant gadget to keep him cool all the time, anywhere he goes.

Trending News: Indians are very innovative when comes to coming up with easy life hacks on a budget. There are many hacks for staying cool in the scorching heat of Indian summers, but how many of those makeshift ACs or coolers can you carry around with you everywhere? This baba from Uttar Pradesh’s Lakhimpur Kheri has come up with a desi jugaad to beat the heat. The ‘jugaad’ is not only genius but environment friendly as well.Also Read - Police Officer Shares Viral Video Of Pankaj Tripathi Giving Life Advice Everyone Needs to Know. Watch

A 77-year-old man named Lalluram came up with a brilliant gadget to keep him cool all the time, anywhere he goes. Pictures have gone viral on social media that show the elderly man wearing a plastic helmet, the one that construction workers wear. Attached to the yellow helmet is a small motor fan in the front. The portable fan is powered by a solar panel that is on the back of the helmet. Also Read - Viral Video: Leopard Attacks Cyclist Near Kaziranga Park in Assam. Watch What Happens Next 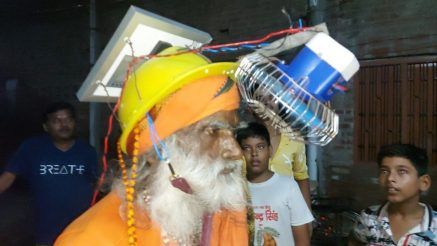 How did the baba come up with this quirky idea? Like every day, the man was going around selling pooja flowers door-to-door. Due to the high temperatures, Lalluram fell sick. He was unable to go out to sell his goods and this made life tough for him and his family. The family was barely able to make ends meet so Lalluram’s ill health took a toll on them. After he got better, he realised he needs a portable fan as he’s unable to bear the heat. That’s how he came up with the idea to wear a solar-powered fan on his head.

He made this quirky portable fan by borrowing the items from several people as he barely had any money left since he fell sick. He said that the portable fan gives him some relief from the heat. The intensity of the fan depends on how strong the sun’s rays are.