Because of flooded roads, they reached the wedding venue in a large aluminium cooking vessel on Monday morning.

Alappuzha: Torrential rains have hit the coastal state of Kerala since Friday, triggering landslides, swelling rivers and leaving vehicles submerged in muddy water. On Monday, things went for a toss as by then the roads had disappeared and water was flowing all over the area. However, despite the chaos, the spirits of a young couple were not crushed as they braved flooded roads to reach their wedding hall in Alappuzha’s Thalavady.Also Read - Viral Video: Desi Bride's Dance on 'Pappu Can’t Dance' With Her Squad is Winning Hearts | WATCH

Generally in Kerala, the bride and groom come to a temple or the wedding hall in a car but it was not the case for Rahul and Aishwarya. Because of flooded roads, they thought of a jugaad and reached the wedding venue in a large aluminium cooking vessel on Monday morning. All decked up to reach the temple, the couple came into a traditional rice cooking copper vessel and arrived at the temple and as per the planned ‘muhurthum’ (auspicious time for a wedding) to become husband and wife.

“We were not scared to travel in the vessel,” said an excited Rahul while Aishwarya said, “We all are happy that the wedding took place at the planned auspicious time.”

A relative who organised the ‘vessel’ trip said, “Some areas near the temple were almost submerged but we managed to bring both the bride and the groom on time.” There were a handful of relatives present and the marriage hall was flooded, too, but not the stage where the marriage ceremony took place in presence of the temple priest. 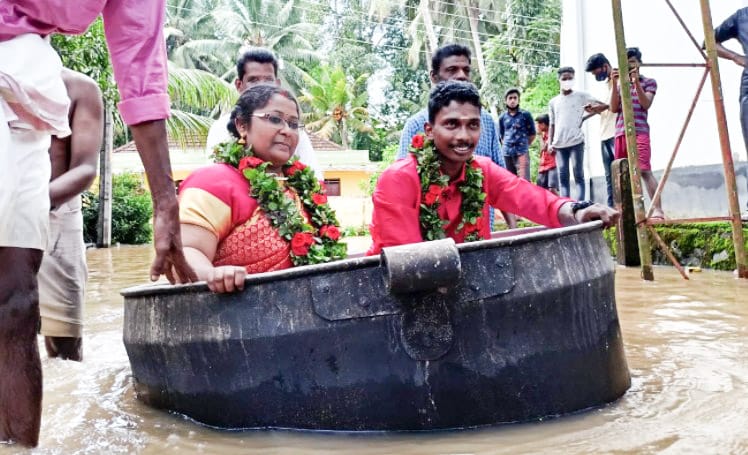 After their wedding, the couple told reporters, that due to COVID they had kept invitees to a minimum. They also said that since they had scheduled the wedding for Monday, they decided to go ahead with it as it was an auspicious event and did not want to delay it any further. They said that when they arrived at the temple a few days ago, there was no water, but after the heavy rains in the past two days, the place got flooded.

The couple are health workers working at a hospital in Chengannur.