An environment activist has been pasting photos of Gods on trees to save them from felling for a proposed road in Chhattisgarh's Balod district.

Balod: As ecological threats to people and the planet intensify, it’s extremely crucial to act soon to save our planet from destruction. One of the simplest ways to do it is by planting and protecting trees. In a bid to do the same, an environment activist has been pasting photos of Gods on trees to save them from felling for a proposed road in Chhattisgarh’s Balod district.Also Read - In a First, Tree Surgeons Appointed in Mumbai to Save Vulnerable Trees From Falling | See Pics

According to an ANI report, The Public Works Department has proposed to build an 8-kilometer road from Taroud to Daihan in the Balod district. The activist, Virendra Singh, said that the local community wants development, but not at the cost of trees.

“The authorities are saying that just 2,900 trees would be cut for the project, but since the small plantation is not considered, I fear that the actual number will be over 20,000. We want development, but don’t want forests to be harmed,” he said.

Singh is also requesting the villagers to come forward and to help him in saving the forest as it is very essential to preserve the environment, especially in the present times. “We have not received rainfall yet; somewhere there are incessant rains, others are not even getting their due share.”

“Global warming and pollution both are a cause of deforestation. We have to save the trees to save the planet,” Singh added. 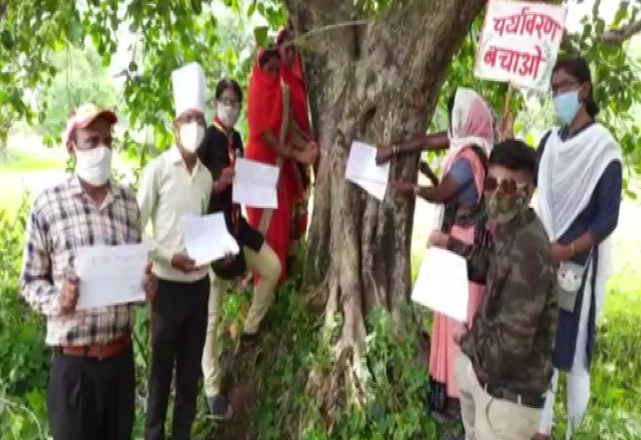 “We started with the Chipko movement, then through poster banners at the intersections, then by tying the Rakshasutra and now by pasting photos of Lord Shiva on all the trees that will be cut, we are protesting against the cutting of trees,” he said.