Ratlam: The COVID-19 pandemic has put a damper on marriages throughout the world, and many couples who were looking forward to the big day have been forced to either postpone their wedding or celebrate it in a loW-key manner. One such couple in Madhya Pradesh’s Ratlam, however, got married in PPE suits on Monday after the groom tested positive for Covid. A video of the unique wedding has emerged that shows the bride, groom and three others in full protective suits, while chants for pheras can be heard in the background as the couple goes around the fire.Also Read - Madhya Pradesh Farmer Donates Rs 2 Lakh Saved For Daughter’s Wedding To Buy Oxygen

Notably, after hearing about the wedding, the administration reached the venue and tried to stop the marriage. But after elders and relatives pleaded with them, the local administration agreed and the marriage was conducted in their presence. They just placed one condition–that the bride and groom would marry wearing PPE dress. Both the families are happy with the lockdown marriage while many relatives of the family blessed the bride and groom on the video call itself. A total of 8 people attended the wedding, 4 each from bride and groom’s side. 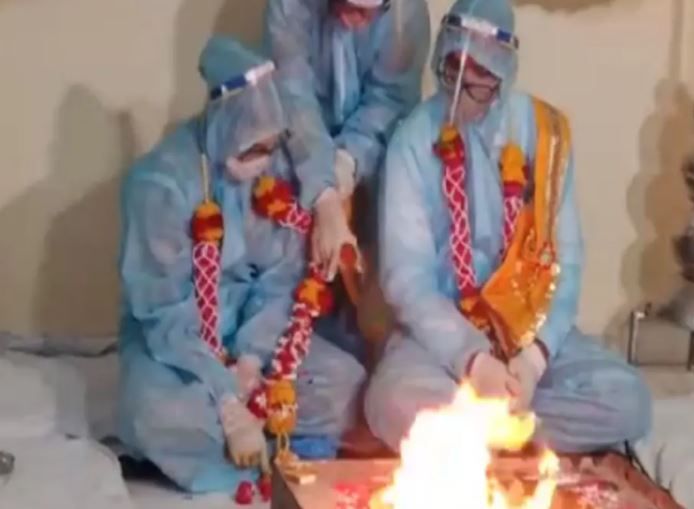 “The groom tested positive on April 19. We came here to stop the wedding but on the request and guidance of senior officials, the wedding was solemnized. The couple was made to wear PPE kits so that the infection doesn’t spread,” Navin Garg, a district official, was quoted by ANI as saying.

Madhya Pradesh has limited the number of people at weddings to 50 to to slow the spread of Covid.

In a similar story, a couple from Kerala’s Alappuzha district on Sunday also tied the sacred knot at the covid ward of Alappuzha medical college and hospital after the groom tested positive for COVID-19. During the wedding, the bride was seen wearing a PPE Kit while the groom was dressed in blue shirt and white dhoti.