In a video that is widely being shared on social media, an adorable monkey is seen doing household chores--cutting vegetables, on the behest of a woman, who is presumably her owner.

Viral video of monkeys cutting vegetables: Monkeys are generally considered to be mischievous animals, but this viral video will change your perception of them. In a video that is widely being shared on social media, an adorable monkey is seen doing household chores–cutting vegetables, on the behest of a woman, who is presumably her owner. In the video, a woman whose face is not shown, is seen cutting vegetables and the monkey is sitting near her. She passes on the vegetables into a big bowl kept in front of the monkey and the animal swiftly cuts them into half, in a non-stop speed. It seems that the monkey has been trained well and does his job perfectly.Also Read - Pawri Ho Rahi Hai: Viral Video of Monkeys Sharing & Eating Cake is The Sweetest Thing on Internet Today | Watch

This video has been shared by IRS Aman Preet on Twitter. While sharing the video, she wrote, ‘It is so that if we decide to do something, then we get the most work done from both humans and monkeys !! Woman power’.

This video has been viewed more than 11 thousand times so far, with more than 170 retweets. People are quite enjoying the funny video and pouring a lot of comments too. 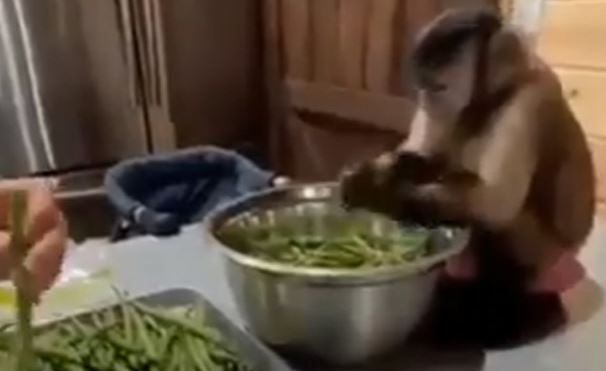 Here’s what people are saying:

Indeed, women are best managers. This is proven fact.

I can’t say about getting work done but that’s sure that women can make a man to monkey..😝😝

Recently, another video showing a group of monkeys feasting upon a huge birthday cake, and thoroughly enjoying the sweet treat, had gone viral. What’s interesting is the fact that none of these monkeys is seen fighting over the cake and sharing it equally amongst themselves.

Watching such animal videos not just make you feel good, but also reduces stress, according to many studies. Though these videos might seem silly at times, the light-hearted nature of such content can lift your mood and help build your resilience to stress. So, what are you waiting for?