The 15-second clip shared on Facebook shows the man balancing himself between two walls on the backside of a building.

Viral Video: As the Covid vaccination drive is in full force across the country, long queues are seen outside vaccine centres everyday. Needless to say, standing in a long queue is a big task in itself and that’s why a man stumbled upon a jugaad. A video of the incident which is going viral on social media shows a man lifting himself up between two walls to get a jab through the window as people stand in a long queue outside waiting for their turns.Also Read - Viral Video: Bride & Groom Get Married on a Boat in Middle of The Ocean, Pet Dogs Also Attend Wedding | Watch

The 15-second clip shared on Facebook by a user named Tarun Tyagi, shows the man balancing himself between two walls on the backside of a building. He has removed his shirt and rolled on his right arm and shoulder so that the vaccine can be administered properly. Seconds later, a healthcare worker from the window, wearing rubber gloves, is seen pushing the vaccine into the man’s arms. The camera then pans to show viewers the long queue outside the COVID vaccine center.

“Aapasdari aur setting to humare desh ki shaan hai (mutual understanding and management skills are the dominating skills of our country),” the video is captioned.

Since being shared, the video has gone viral, amassing over 4.8 lakh views and 2.5 K likes. While some found the man’s jugaad hilarious, others said that getting vaccinated like this was not safe. One user said, “Setting dekho bande ki.”

Here are other reactions: 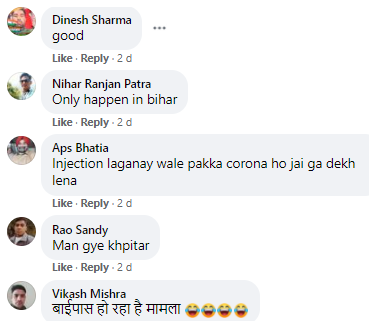 A user named Ranjan Gupta claimed that the video was from Bihar’s Samastipur district, however there is no conformation regarding the same.