In a hilarious incident caught on camera, a cute Labrador Retriever snatched the reporter’s microphone and ran away with it during a live broadcast.

Viral Video: When a TV weather reporter was busy informing her viewers about the arrival of spring in Moscow, a dog decided to steal all the limelight by pulling off some cute mischief. In a hilarious incident caught on camera, a cute Labrador Retriever snatched the reporter’s microphone from her hand and ran away with it during a live broadcast.Also Read - Viral Video: Uncle's Desi Technique For Shaving Beard is Some Next-Level Jugaad | Watch

The incident took place when Mir TV journalist Nadezhda Serezhkina was preparing to update about the weather condition. Just as Serezhkina began by saying, “Spring has arrived in Moscow, the temperature will be 8 degrees Celsius, nine degrees Celsius…,” the Labrador appeared out of nowhere, jumped at her and grabbed the microphone. Serezhkina ran after after the dog, shouting “Stop, stop, come here.” Meanwhile, back at the studio, Serezhkina’s colleague Elina Dashkueva, who seemed a little stunned explained that ‘given all this’, the connection was lost.

A dog in Russia grabbed the reporter’s microphone and ran away during a live broadcast pic.twitter.com/R1T8VZ5Kpt

The video of the incident went viral on Twitter after journalist and analyst Ali Özkök posted it on the micro-blogging platform. Needless to say, the video has gone crazy viral, and amassed more than a whopping 11 million views and thousands of comments and retweets. Many commented how Serezhkina’s colleague in the studio, Elina Dashkueva, managed to keep a straight face despite the hilarity of the incident.

Here are some reactions:

How did the anchor keep a straight face?

American anchors would be rolling on the floor howling. Interesting difference!

In Soviet Russia, dog interviews YOU!

The anchor’s slight smile and overall restraint from bursting into laughter is impressive. 👏🏽👏🏽👏🏽👏🏽👏🏽

he just wanted an interview pic.twitter.com/TuOqTRR30e

Dogs are the best and she did really good job not laughing at her on camera 😂😂😂 pic.twitter.com/AfVfRaaWZx

Later, the reporter caught up to the dog and retrieved her microphone. She told watchers that ‘no-one was injured, but the microphone took a bite or two’, as she poses with the proud-looking dog. 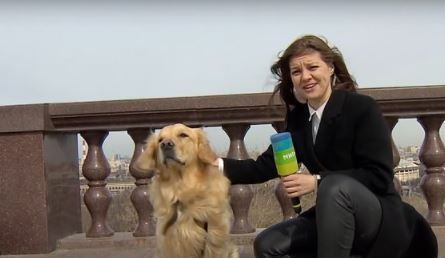 ‘Elina, as I said, the weather is truly perfect, just right for walking your dogs…..That’s all from me,’ she concludes the report.