Most of the users in the comments section did not believe that the translucent dog was a ghost and called the video a hoax.

A spine-chilling is going viral on social media which shows a ‘ghost dog’ claimed to have been captured on CCTV footage. An Australian man, Jake DeMarco, claimed that his pet dog named Ryder was playing with a ‘ghost dog’ in the backyard of his house in Melbourne However, netizens are finding it hard to believe that the dog could be a ghost.

The video was uploaded on YouTube by Caters News Agency and has gone viral with more than 7 lakh views.

The 31-second clip shows Jake’s pet dog Ryder chasing a translucent-looking white dog in the backyard. The dogs run around in the fenced-in area a bit more and a few moments later, the ‘ghost dog’ disappears from the frame.

Jake said he absolutely stunned on spotting this incident in his security camera’s live footage. The main reason Jake was spooked was that the backyard was locked by a high fence and he believes that it is impossible for any dog to jump over it. On seeing this, Jake ran outside but the ‘ghost dog’ as he claims has had disappeared by then.

Most of the users in the comments section did not believe that the translucent dog was a ghost and called the video a hoax. Here are some of the comments from the video: 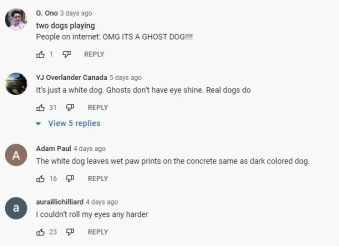