While it's difficult for most of us to manage just a few eggs, Gregory Da Silva, from West Africa, managed to carry a whopping 735 eggs on his hat and balanced it over his head.

Viral Video: People in this world have incredible skills and Guinness World Records makes sure to push creativity and talent to its limits and beyond. In one such world record, a man from Benin managed to carry 735 eggs on his hat! While it’s difficult for most of us to manage just a few eggs, Gregory Da Silva, from West Africa, managed to carry a whopping 735 eggs on his hat and balanced it over his head. The official Instagram page of Guinness World Records shared a video of the feat, which has gone viral.Also Read - Viral Video: Chennai Man Drives Auto-Rickshaw on 2 Wheels For 2.2 Km, Sets Guinness World Record | Watch

“Most eggs carried on a single hat, 735 by Gregory Da Silva,” GWR wrote on Instagram, as they shared the video. In a reply to their own post, they added, “Gregory from Benin in West Africa spent three days attaching the eggs to his hat for this brilliant balance record on the GWR Special show for CCTV in China.”

Notably, Da Silva, popularly known as ‘Eggman’ is a well-known personality locally. He has also travelled across the world showcasing this talent of balancing eggs and even  appeared on many television shows.

The video has gone viral, with people amazed at his skills while many wondered how did he pull off the stunt. Others filled the comments section with fire, clap and heart-eye emojis.

One user wrote, “How does he even get that down without making an egg tsunami”. Another commented, ”“Imagine if he sneezed.” A third asked, ”What was the total weight of all the eggs combined.” 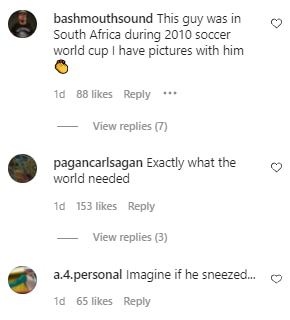