On Sunday, a Bhojpuri version of the viral Sri Lankan song Manike Mage Hithe was released on YouTube, and is now going viral on the internet.

Viral Video: If you are active on social media, you must have heard the melodious song, ‘Manike Mage Hithe’ as the background track to many videos and Instagram reels. The catchy folk rhythm has created a sensation in both Sri Lanka and India and is on everyone’s lips these days. Several celebrities and netizens alike have shared videos dancing on ‘Manike Mage Hithe’ which are gaining a lot of love and appreciation on social media.Also Read - Viral Video: IndiGo Air Hostess Dances to Manike Mage Hithe on Empty Flight, People Love It | Watch

Performed by Sri Lankan musician Yohani Diloka de Silva and rapper Satheeshan, the song has amassed millions of views ever since it was released. Tapping on the massive popularity of the song, several artists have also adapted it into other languages such as English, Hindi, Tamil, and Bangla etc. So how could Bhojpuri industry not join in on the craze? On Sunday, a Bhojpuri version of the song was released on YouTube, and is now going viral on the internet.

The Bhojpuri version is composed by Ranjan and rapper Bihari Gypsy Soul and the lyrics are penned by Rishi, Abhishek, and Gypsy Soul. Since being shared 3 days back, the video has received a lot of lot from social media users, with many appreciating the version. ”Zabardast hai sir,” wrote one user, while another commented, ”Mast bhai…You make us proud…”

Here are other comments: 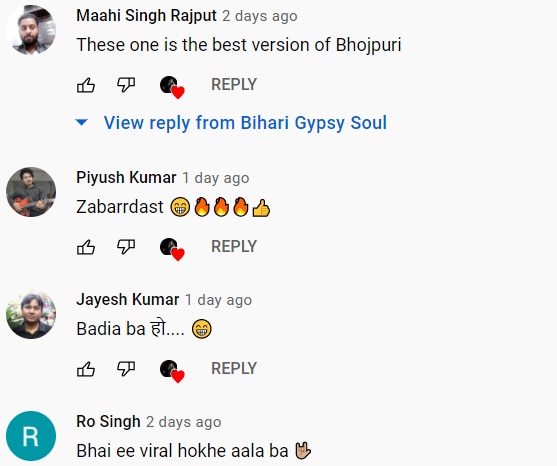 Previously, many celebrities like Amitabh Bachchan, Madhuri Dixit, Parineeti Chopra, Tiger Shroff, Rannvijay Singha, Neha Kakkar and Yashraj Mukhate shared videos of them on their social media account, where they can be seen grooving to the rhythm of this song.

According to Times of India, the original singer of ‘Manike Mage Hithe’, Yohani will perform in India soon, in an event called Supermoon #NowTrending.

“When we recorded this song, we never did it with any plan in mind. It was a project born out of our combined love for music.I am humbled to see the love it has received from India, and I couldn’t be more excited to be a part of something as incredible as Supermoon #NowTrending. I am thrilled and look forward to performing live amongst my fans and connecting with them in person,” Yohani told Times Now.