In the video, Kili Paul is seen lip-syncing to Tujhe Kitna Chahne Lage, and his emotions and expressions are on point.

Viral Video: Tanzanian content creator Kili Paul, who became a viral sensation by lip-syncing and dancing to popular Bollywood songs, is back with another video. His latest Instagram reel features him lip-syncing a popular song from Bollywood movie Kabir Singh. In the video, Kili Paul is seen lip-syncing to Tujhe Kitna Chahne Lage, and his emotions and expressions are on point. Picturized on Shahid Kapoor and Kiara Advani, the song has been sung by Arijit Singh and the music has been composed by Mithoon. “I love both versions. Tujhe Kitna Chahne Lage (sic),” the video caption reads.

The viral video has garnered more than 201 K views and more than 23,000 likes, and still counting. Many people applauded him for his amazing lip syncing skills and filled the comments section with emojis. His acting, expressions and the way he was completely engrossed in his performance won a lot of hearts online. One user wrote, ”Awesome love from india.” Another wrote, ”You are my favourite.” 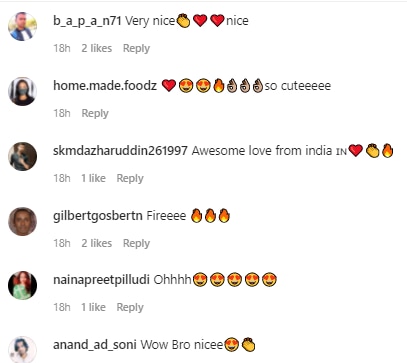 Notably, Kili Paul shot to fame after his video of lip-syncing to the Shershah song ‘Raataan Lambiyan’ with his sister Neema Paul went crazy viral and even drew reactions from Siddharth Malhotra and Kiara Advani. Paul, who has 917K Instagram followers, has also made reels on other Bollywood hit songs and has gained a huge following of Indian audience. A few Bollywood celebs have also started following him and are seen leaving likes on his videos.