The woman identified as Pakhi Roy, who is a content creator with 29.9 K followers, is seen dancing to the song with adorable expressions, and perfect steps.

Viral Video: The soulful song Manike Mage Hithe sung by Sri Lankan singer Yohani Diloka De Silva is still ruling as internet’s favourite and continues to create waves in both Sri Lanka and India.  Several celebrities and netizens alike have shared dance videos on the song which are gaining a lot of love and appreciation on social media. Now, another video of a woman performing Bihu dance on the viral song has gone viral on social media, delighting people.Also Read - Viral Video: This Duck's Incredible Moonwalk Will Remind You of Michael Jackson, Internet is Amazed | Watch

The woman identified as Pakhi Roy, who is a content creator with 29.9 K followers, is seen dancing to the song with adorable expressions, and perfect steps. In the video, she can be seen dressed in a yellow saree and performing Bihu, which is an indigenous folk dance from the state of Assam.

The video has gone viral and netizens love her dance and infectious smile. One user wrote, ”Very nice super,” while another commented, ”So lovely.” 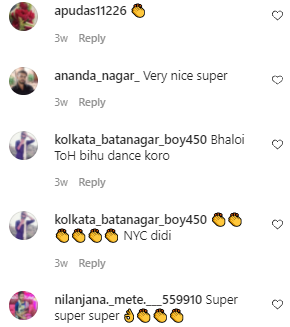 The viral Sinhala song has catapulted many content creators into instant limelight. Recently, an air hostess from IndiGo Airlines went crazy viral online after her dance on Manike Mage Hithe was immensely loved by viewers and raked over 60 million views on Instagram.

Previously, many celebrities like Amitabh Bachchan, Madhuri Dixit, Parineeti Chopra, Tiger Shroff, Rannvijay Singha, Neha Kakkar and Yashraj Mukhate shared videos of them on their social media account, where they can be seen grooving to the rhythm of this song.