One thing is clear from Friday's incidents, no messing with No-So-Cool Captain Virat Kohli for he is not your regular calm and composed captain Mr. Cool Mahendra Singh Dhoni. 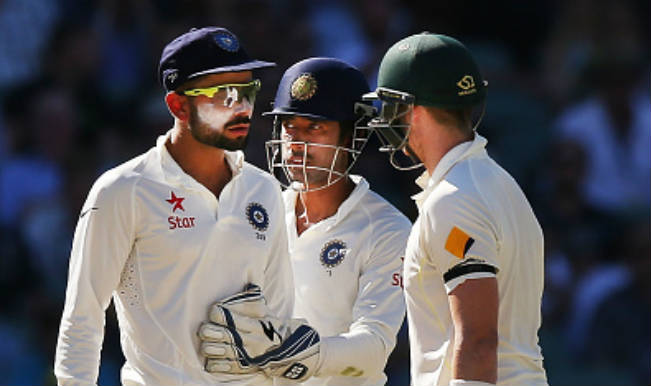 The India’s Tour of Australia has finally come ‘alive’, and only a true follower of the two sides can understand what the term ‘alive’ stands for. The handful of cricketers responsible for breathing fire on Day 4 of 1st Test Match at Adelaide Oval, Adelaide have interestingly been Varun Aaron, David Warner, Virat Kohli, Steve Smith, Shane Watson, Shikhar Dhawan and Rohit Sharma. Indian Skipper, Virat Kohli, had made his intentions clear about leading the side Down Under – We will fight fire with fire! And lo! the hot-headed Delhi Boy ensured to mark his first Test as captain with some verbal fire works. Watch the complete video of the ugly brawl between Virat Kohli and Steve Smith on Official Website of Star Sports. Also Read - India Squad For South Africa Tour: With Mohammed Siraj's Rise; Will Ishant Sharma Find a Spot in Virat Kohli's Side?

If you thought that the four-match Test series between India and Australia would be played with ease in the shadow of recent death of Aussie batsman Phillip Hughes, the fourth day rubbished such notions. On two occasions, both the sides were involved his ugly on-field spat beginning with David Warner and Varun Aaron fight. The Indian pacer thought he got his man Warner and began his wild celebrations only to be reversed by third umpire who revealed it to be a no-ball. Warner came back to mock his opponent. Also Cricket Highlights: Watch India vs Australia 1st Test Day 4 Full Video Highlights Also Read - India Squad For South Africa Tour: Why Rohit Sharma Should Take Over From Virat Kohli as ODI Captain

Too much talks and heated arguments and just when everyone thought things to have cooled down, it was short-tempered Indian captain Virat Kohli’s turn to have some word of advice for another Aussie centurion, Steve Smith. Kohli, known for his on-field angry episodes wass irked by Steve Smith’s gesture made towards Rohit Sharma who had appealed for LBW to umpire. Virat Kohli was seen telling [Read: Warning] Steve ‘to stay in (his) limits’!

One thing is clear from Friday’s incidents, no messing with No-So-Cool Captain Virat Kohli for he is not your regular calm and composed captain Mr. Cool Mahendra Singh Dhoni.