Notably, the handmade sculpture, entitled Diva, was unveiled by visual artist Juliana Notari on Saturday at a rural art park.

In a Facebook post, Notari said the scarlet hillside vulva was intended to “question the relationship between nature and culture in our phallocentric and anthropocentric western society” and provoke debate over the “problematisation of gender”.

“Nowadays these issues have become increasingly urgent,” the artist added, which many think is a dig at the intolerant climate in Jair Bolsonaro’s Brazil. See the post here which has gone viral and amassed more than 25,000 comments and 12,000 shares:

Meanwhile, the artwork has been slammed by many art critics, including Jair Bolsonaro’s supporters, who have called the structure, ‘obscene’ and ‘transphobic’. Here are some reactions:

A white woman named Juliana Notari used a bunch of Black men to create a vagina on a hill.

Not only is this transphobic, but what is it with white feminists equating on their body parts with their womanhood. It's fucking creepy. pic.twitter.com/nJeUegqfI2

Such stunning lack of self awareness … this Karen in Brazil got black men to dig trenches in the heat on subsistence wages to create a giant vagina art sculpture. pic.twitter.com/7eC0yRekFD 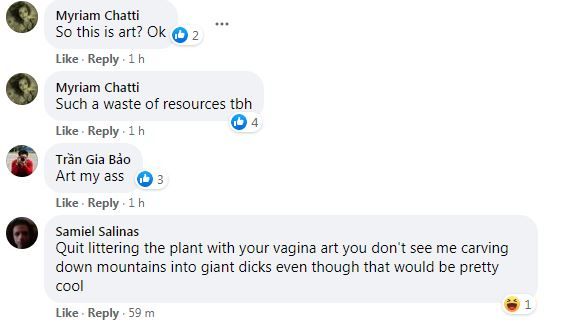 However, there were also many who praised the artwork and defended the freedom of the artist. One user wrote that it is the ‘best public art of 2021 so far’ while another wrote, ”Excellent work… obviously never will be understood by the patriarchs, the phalocrats and the neoliberal and facho-Christian mediocrities like Bolsonaro and his fauna.”

I love this. The far-right in Brazil offended by a vagina. Where the hell do they think they travelled from to enter this world…? 😂😂😂

It has made my day. Completely made my day! 😂 https://t.co/DWp2H7zzKg pic.twitter.com/OUedifquCL