After the animosity of six long years, SRK and Salman hugged each other by forgiving every grudges of the past. 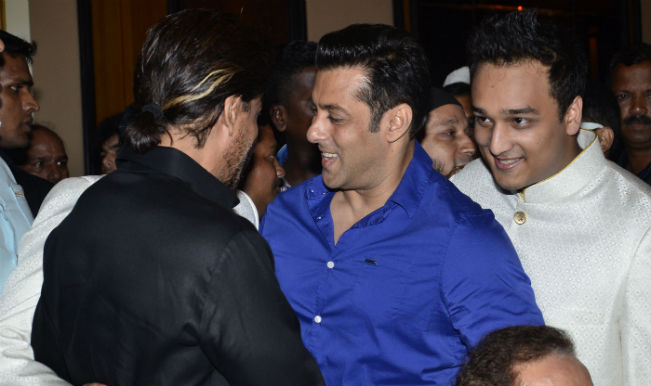 Baba Siddique is proving to be the grudge-settler of the two superstars Shahrukh Khan and Salman Khan. The Khans hugged each other ‘again’ at the Iftar party hosted by Baba Siddique this Sunday. This is the third time they have grabbed the attention by hugging each other. Iftar party 2013 was the first occasion, on which both were seen resolving their six-year old animosity. They again hugged at Start Guild Awards and it became the most talked topic all around. And now, they are back again with their trademark hug. Also Read - Antim: Salman Khan Requests Fans Not to Burn Crackers in Theatre, Shares Shocking Video

After the animosity of six long years, they hugged each other by forgiving every grudges of the past. The actors have always maintained distance, since the quarrel at actress Katrina Kaif’s birthday bash in the year 2008. In these six long years, they always have neglected each other, each time they confronted. Also Read - Salman Khan’s Father Salim Khan Spills Bean About Katrina Kaif-Vicky Kaushal’s Wedding

This year, Bhai-Jaan is ready to ‘Kick’ the records and King Khan will greet ‘Happy New Year’ on Diwali.