The fitted silhousettes paired with the statement jewlery enhance her look in every which way contributing to the luxurious feel. 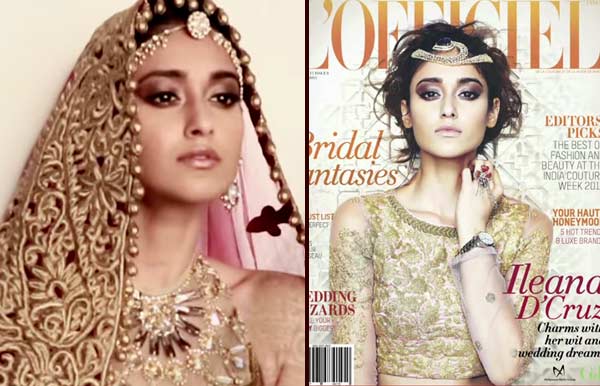 The stunning Ileana D’Cruz, who has charmed everyone with her stunning looks and excellent performances, has featured on the cover of L’Officiel India August 2014. Also Read - Ranbir Kapoor And Shraddha Kapoor's Film Directed by Luv Ranjan, Gets a Release Date- Read Deets

Dressed in a royal golden and red colour outfit, paired with magnificent and exquisite jewelry, Ileana looks nothing less than a Greek Goddess in the embellished wedding outfit. The 26-year-old actress looks drop- dead gorgeous in shimmering gold. The fitted silhousettes paired with the statement jewlery enhances her look in every which way contributing to the luxurious feel. Also Read - 5 Big Films, 5 Big Stars - YRF Announces The Release of Shamshera, Prithviraj And Other Bollywood Biggies

The actress, who shot to fame after Ranbir Kapoor starrer Barfi, shines from every angle on the cover of the August edition of L’Officiel. This exclusive video posted below is a sneak peak of the ultra-glamorous shoot featuring Ileana D’Cruz who looks strikingly beautiful and will surely make all you guys go weak on your knees!