Actor Vidya Balan has recently dropped a funny video where she can be seen lip-syncing a pandit speaking about the qualities of a woman as ‘devi’ before and after marriage. The Tik Tok video is making the internet leave into splits. The hilarious video has got the attention of Dabangg actor Sonakshi Sinha and she definitely can’t stop laughing. In the comment section, she left multiple laughing emojis.Also Read - Sonakshi Sinha Is 'Playing With Pink' In Her Rs 6.5k Mini Dress

Check out the video here:

This is how Sonakshi Sinha Reacted: 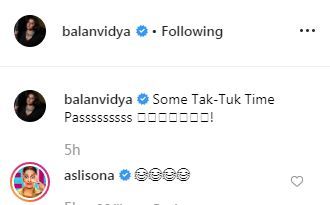 Several Vidya Balan’s fans have commented on her post. While one wrote, “Hahah, the best! 😂 I hope some people see this, I’m Nina from Germany and I’m regularly uploading new Bollywood dance & acting videos and it would mean so much to me if you’d stop by & take a look at my page 💕 I’m trying to fight stereotypes and showing my passion for Indian culture as a German girl 🇮🇳🇩🇪 Thanks for your attention.”The other commented, “Hajhahahahahaah tooooooo good @balanvidya bole to ek Numbr.”

Meanwhile, on the work front, Vidya Balan will be next seen in Mission Mangal along with Akshay Kumar, Taapsee Pannu, Sonakshi Sinha, Kirti Kulhari and Nithya Menon. Mission Mangal is directed by Jagan Shakti and produced by Fox Star Hindi and Hope Productions. The film, that’s expected to show the same inspiring story, is slated to hit the screens as the big Independence Day release this year.