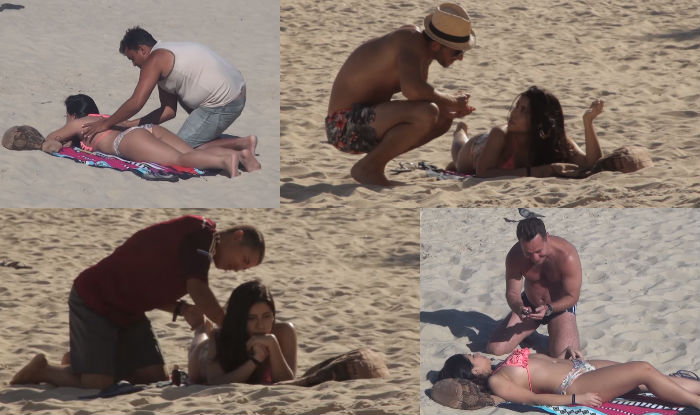 Also Read - Watch: This Viral Video on 'How to Sound Like Prateek Kuhad' Will Make You Fall Off Your Chair Laughing

When men see a hot woman in bikini, we know that they cannot take their eyes off. But what if that hot woman asks a series of men to rub her back with sunscreen lotion while she is sun bathing? Do you think the men will ignore that offer? Something similar has happened even in this footage. A Brazilian hottie asked out series of men at the beach to rub her back. Those strangers without any hesitation took the lotion from her hand and agreed to apply it on her back with a big smile and yes they even tried to flirt with her. (ALSO WATCH: #MakeupMania: Watch the transformation, 1 face and 5 different looks) Also Read - Best Interview Ever! Journalist Sarcastically Asks Donkeys Why They Are Not Wearing Face Masks | Watch

But who knew that there is something unusual in store for them. Till the time the men rubbed the woman’s back, the only thought that might have come to their mind was ‘luck is with me’. But that luck, turned into horror when this hot Brazilian woman turned over. The men smiling continued to apply the lotion on the hottie’s upper body but when they moved downwards, they couldn’t believe their eyes. (ALSO WATCH: Watch this funny video in which babies are dressed in weird costumes!) Also Read - Thief's Pants Fall Down While Stealing Amazon Package in a Hilarious Viral Video

These happy men saw a bulge in the woman’s bikini bottoms. The reaction of those happy men who were in a state of shock is something you cannot afford to miss. This video has been shot in the beautiful Rio de Janeiro. Watch the hilarious video shared by David Mafra and let us know your views.