Who is Pappu in India? Google Search answers ‘Rahul Gandhi’ & explains why!

As the matter of fact, Rahul Gandhi's birthday on July 19 was earlier celebrated as #ViswaPappuDiwas.

How will Sonia Gandhi find Rahul Gandhi if he ever get lost in India? She will simply do a Google search writing – ‘Who is Pappu in India?’ and viola she can find her son back. Well we have an official confirmation over the Congress scion being regarded as the ‘Pappu’ of India. Search engine giant Google does not only link search results to queries like ‘Who is Pappu in India’ to Indian politician Rahul Gandhi but also explains it pretty well. As the matter of fact, Rahul Gandhi’s birthday on July 19 was earlier celebrated as #ViswaPappuDiwas by the enthusiastic netizens on social media. Also Read: Who is called Feku? Google Search answers ‘Narendra Modi’ & explains why Indian PM is Feku! Also Read - Kangana Ranaut's Male Version! Ranvir Shorey Gives Back To Trolls Who Try To Roast Him Over His 'Rahul Gandhi' Tweet

The Vice-President of Indian National Congress (INC) who is well known for his less-IQ speeches got major spotlight for the same during the 16th Lok Sabha Elections. His interviews and speeches during Congress campaign were found to be dumb and hilarious with Rahul Gandhi becoming a laughing stock as Pappu, which roughly hints at being a ‘loser’!” Also Read: Rahul Gandhi’s interview makes social media go gaga over the confused ‘RaGa’. Also Read - Rahul Gandhi Tests Positive For COVID-19 With Mild Symptoms, PM Modi Wishes Speedy Recovery

On Google, when a user searches for ‘Who is Pappu in India’, the result is well explained answer that reads – “Rahul Gandhi – He is the biggest dumb in Indian politics. I think it is deeply insulting to Pappu to refer Rahul gandhi as Pappu, because one day eventually Pappu passes the exam. “Pappu paas ho gaya.” However, Rahul was thrown out of his institution.” Also See Gallery: Rahul Gandhi’s Funniest jokes and Memes! Also Read - Rahul Gandhi Cancels West Bengal Poll Rallies Due To COVID Surge, Urges Other Leaders For Same 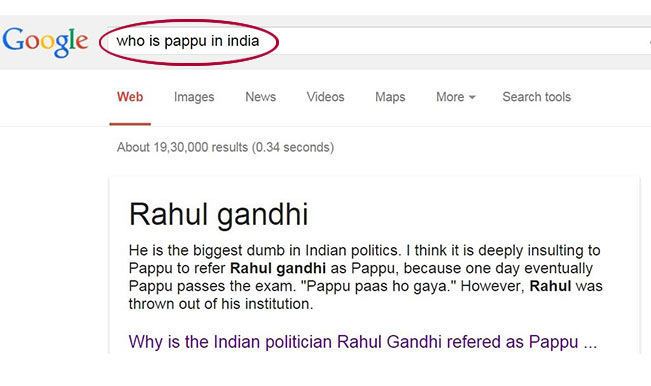 Rahul Gandhi is one of the prominent figures of the Indian politics but mostly for the wrong reasons. In his bid to continue the Gandhi legacy of his family boasting of great leaders, Rahul Gandhi has failed more often. Trolled by the netizens on social media for being a dumb leader, Sonia Gandhi’s son has literally been addressed as Pappu of India political scenario. His infamous interview with Times Now by Arnab Goswami sealed the title of Pappu of India in the year 2014, when he gave mindless answers. One may not be sure of the future of his political career but the people can definitely have a hearty laugh over the Rahul Gandhi memes and trolls on Internet.