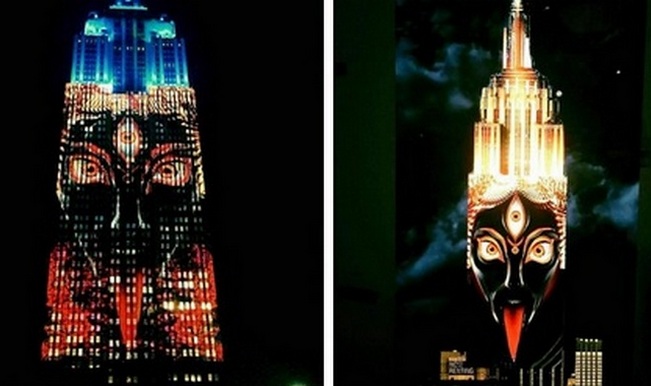 After the famous Empire State Building in New York City projected a series of endangered species, it was the turn of Indian Goddess Kaali to feature on it. Goddess Kaali is an avatar of Maa Durga herself – a more aggressive and fierce version of Goddess Durga. But why was Kaali, denoting death and destruction from her ire, used to light up the Empire State Building? Also Read - Trending News Today March 11, 2020: Oh, The Irony! Coronavirus Conference In New York Cancelled Due to Coronavirus

Well, artist Android Jones wanted to show that to fight urban issues like pollution and stuff, one needed a fiery Goddess like Kaali. All these recent projections on the Empire State Building have been a part of an exhibition by filmmaker Louie Psihoyos, titled Projecting Change. Also Read - Harvey Weinstein Found Guilty of First Degree Criminal Sex Act-Third Degree Rape by New York Jury

Watch video to see breathtaking imagery of Hindu goddess Kaali on the Empire State Building! (The video tries to suggest a different meaning to the display, which should be ignored.) Also Read - Watch | Madonna Calls Canada 'Boring', Offers Her NYC Apartment to Prince Harry & Meghan Markle