A video of 23-year old woman smashing the Mercedes of a Samajwadi Party leader in Agra has gone viral. 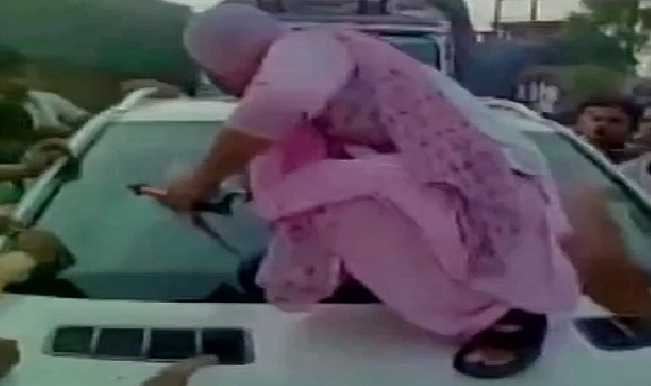 A video of 23-year old woman smashing the Mercedes of a Samajwadi Party leader in Agra has gone viral. The woman was allegedly winked by a gunman of the leader. According to reports, a gunner of local Samajwadi Party leader Abhinav Sharma winked at 23-year old Sadhvi Pandey when she was on her two-wheeler. Taking strong objection, the woman jumped atop of leader’s Mercedes and smashed wind-shield of the car. Also Read - Agra Police Post Attacked, 4 Cops Suspended, 11 People Arrested For Arson

In the video, Sadvhi is seen jumping on the car. She uproots that SP flag hoisting at one end of the bonnet. She breaks the wind-shield of the Mercedes and asks Sharma and his gunner to come out of the car and face her. The incident took place on May 17 when Sadhvi was going along with her sister to see a doctor. She caught the gunner winking at her when her two-wheeler stopped at a traffic intersection alongside the cavalcade of Sharma. (Watch 7-year-old boy from Bihar, Kumar Raj lambasting education system like no other; leaves Chief Minister Nitish Kumar speechless!) Also Read - Children Buried Under Mud While Playing in Uttar Pradesh's Agra, Three Dead

Sadhvi started shouting and huge number of people gathered around the car. According to eye witnesses, Sharma hid inside the car while one of his bodyguards snatched Sadhvi’s mobile and threw it as she was clicking picture of the gunner. The video is being shared by people on social media with the view that such eve teasers should be dealt with in the same manner ignoring their social or political status.