A woman who has worn make up daily for 22 years said that her husband is not happy after she decided not to do it anymore.

Needless to say, being a woman is tough as we have to constantly defend our choices. Even when it comes to makeup, women are mocked for wearing too much of it while some others are made fun of for wearing little or no makeup. In one such instance, a woman who has worn make up daily for 22 years said that her husband is not happy after she decided not to do it anymore.Also Read - No Makeup or Makeup: Why People Judge Women With Makeup ?

“I have risen, showered, shaved my legs, and spent nearly an hour putting on makeup and fixing my hair. I’m tired of it, so I recently stopped doing it on Sundays,” she wrote on Slate.com’s Dear Prudence advice column.

“Mind you, I don’t look like a total slob, I just put on moisturizer, put my hair up in a pony tail and wear track suits or other casual clothing,” she said. However, her husband who wasn’t too happy with her ‘new look’ told her he didn’t find it “sexy”.

She wrote: “My husband is having a fit about my grooming-free Sundays. He is worried that this is the beginning of a ‘downward spiral’ for me into a messy, slobby woman with permanent razor stubble. He still showers, while he doesn’t shave on weekends, I’ve told him his stubble is sexy but he finds nothing sexy about my new look.”

She thinks that he is being “ridiculous and his nagging about it is really getting on my nerves”.

Here is the full note: 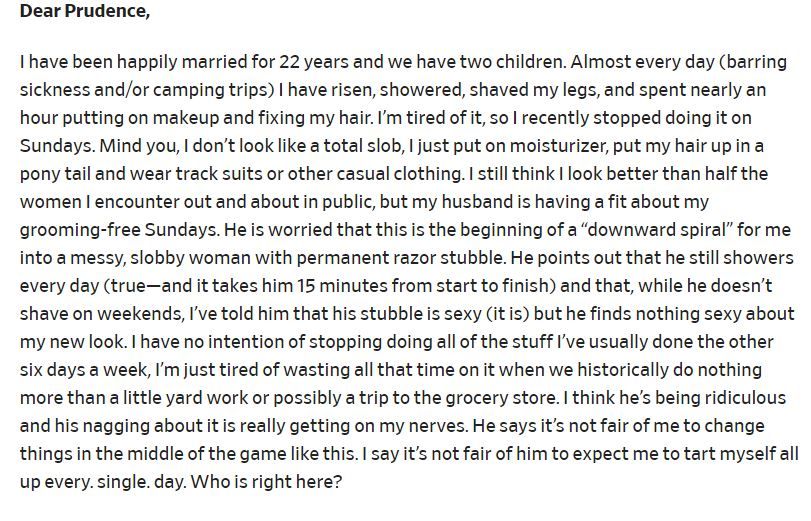 Emily Yoffe, the advice columnist, sympathized with her and bashed her husband’s misogynistic attitude, calling him a jerk.