The oil spill last month in Tinsukia, due to the blast at the Baghjan production well under Baghjan Oil field of Oil India Limited, not only destroyed the aquatic life in the area but also killed the endagered species of Gangetic River Dolphins, a carcass of which was found in Assam's Dibru river

At the heels of the death of a pregnant elephant in Kerala comes the disturbing news of killing of an endagered species of Gangetic River Dolphins, a carcass of which was found in Assam‘s Dibru river. Pointing straight at the oil spill last month in Tinsukia, due to the blast at the Baghjan production well under Baghjan Oil field of Oil India Limited, the chances of an immediate fire decreased due to incessant rain but it destroyed the aquatic life in the area.Also Read - Some People Collected Money To Stop Eviction: Assam CM Suspects Third Party Role In Darrang Violence

Leaving citizens furious for the ecological threat that Oil India Limited’s (OIL) bid to drill for hydrocarbons in a national park in Assam posed, many called out the Union Ministry for Environment, Forest and Climate Change (MoEFCC) for permitting “oil drilling at a distance as close as 500 meters.” Ahead of and even on World Environment Day, many staged outrage on various social media platforms. Also Read - 2 Killed, Several Injured As Cops Thrash Protesters, Open Fire During Eviction Drive in Assam's Darrang District

One user shared a picture of the carcass and wrote on Facebook, “If the Kerala Elephant incident bothers you, this should get you furious because the Ministry of Environment, Forests and Climate Change is directly responsible for the murder of endangered species in Dibru Saikhowa, Assam. You aren’t supposed to drill upto 10 kms near a National Park, Biosphere reserve or Wildlife sanctuary. These corrupt villains permitted oil drilling at a distance as close as 500 meters. As a result of the their activities, an oil blowout occurred which has lasted over 7 days, caused a thick oil spill and killed several exotic species, fish and displaced over 1600 people. Happy Environment Day. Once again, The Minister of Environment, Forests and Climate Change in India must answer for this. Care to share? THIS DESERVES ATTENTION (sic).” Also Read - Assam Girl in Shorts Forced to Wrap Curtain Over Legs to Write Entrance Exam, Calls It 'Most Humiliating Experience' 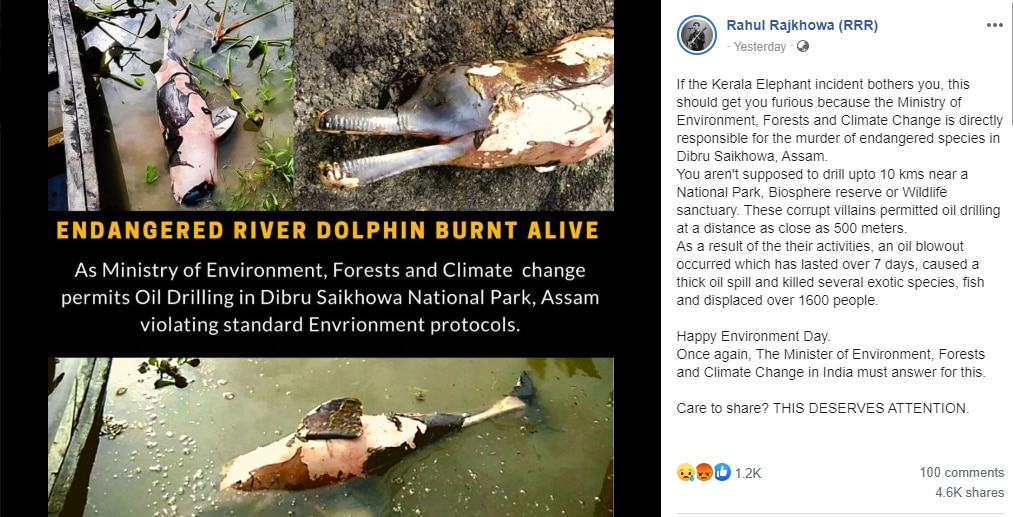 Another took to Twitter and lashed, “Since you’re protesting the death of an elephant, read about the death of an endangered gangetic dolphin caused by Govt’s inaction. Assam oil well continues to leak ‘uncontrollably’ one week after explosion (sic).”

Check out Twitter’s reaction on the news here:

Oil drilling has been allowed near rivers in Assam. As a result, an oil spill happened and river dolphins got burnt. Pls ask @PrakashJavdekar to discontinue this practise! #SaveDolphins

Today is #WorldEnvironmentDay2020 and okay I’ll plant tree for a beautiful #environment but is this really a beautiful environment where this #endangeredspecies river dolphin are burnt alive due to some stupid actions of govt.#Assam #dibrusaikhowa
What do you say?

Why isn’t anyone reporting on the Assam natural gas leak?
Our very own National aquatic animal, a very endangered species- river dolphins, are dying!!

An oil well in Assam is leaking “uncontrollably” after a blow out a week ago. It is feared that has killed endangered #GangeticDolphins and birds. A dead dolphins was found near the well few days ago. Over 2500 people were forced to evacuate their homes.#Assam #OilLeak pic.twitter.com/tL9VBI0s5a

The rivers have thick layers of oil. A dolphin was killed last week. Fishing, in which almost 40 per cent of the local population is involved, is ruinedhttps://t.co/2ckPA3WlOh

There are dozens of oil spills by oil exploration companies in Assam every year & they do a shabby job of cleaning up…Openpit coal mining, oil spills, clandestine saw mills, blowing up hills for stone smuggling…we are ourselves killing Assam everyday..https://t.co/G4Cegoi9kl

Almost a week,Over 900 families moved to Relief Camps, a spike in respiratory illness. Mass deaths of fishes and Dolphins because of oil spilling in river.People of region are protesting to fix the disaster.
Dear Government, this is how you will promote “Vocal for Local”. #assam pic.twitter.com/dLdaQ1XJaQ

Imagine living by a river with dolphins, a lake with fish & birds, forests with hoolock gibbons. Then an oil well blows. Your house, farm, fodder, all covered in oil. You can’t breathe the air.
But that’s the price of development – let’s keep drilling. https://t.co/ohhAUduccE

An endangered river Dolphin has died in Dibru Saikhowa National Park for blowout of gas. Who is responsible for this. Everybody knows. Raise your voice for our nature & wildlife of Assam.#SaveDehingPatkai#SaveDibruSaikhowa#MinistryofEnvironmentandForests #PMOI #UNEP #WEO #IUCN pic.twitter.com/h0fU4XYZCF

With no let-up even after 3 days, the blowout is reportedly continuing in the same magnitude due to the lack of safety measures on behalf of the drilling company. Being 1.108 kms from Dibru-Saikhowa National Park and within 1 km from the famous Maguri-Matapung Wetland, the blast dislocated atleast 2,500 people while many animals have been killed.