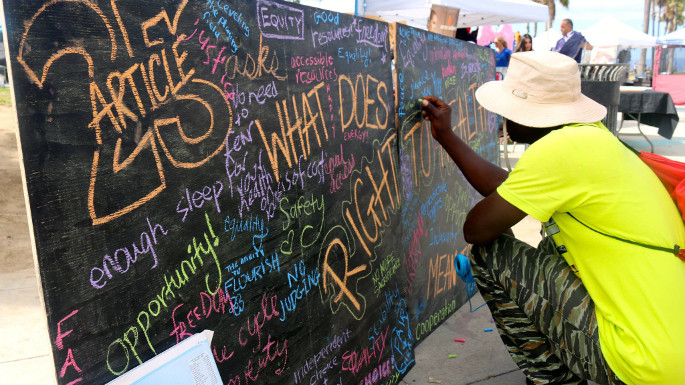 Amin and Asthana have known each other since 2010, when both were staff members of GlobeMed at Northwestern. After discussing the idea of advocacy and movement building in 2013, they continued to work closely to develop the idea for Article 25 at the Department of Global Health & Social Medicine at Harvard Medical School. Also Read - Colorectal Cancer: A Simple, Cheap Test Can Help Potentially Save Lives, Suggests Research

As an anthropology major at Northwestern, Amin learned about global institutions like the International Monetary Fund and the World Bank, as well as global policies like drug patent laws set by the U.S. Congress.

“I learned how these institutions perpetuated an ill-intentioned system abroad to keep entire poor countries trapped in poverty,” Amin said. “Then, when I studied abroad in Cuba, I spent a lot of time studying the relations among politics, civil society and government, which really sparked my interest in learning more about how advocacy is a tool to fix broken systems and policies.”

Asthana studied engineering at Northwestern due to his interest in technology, but realized that if, despite all the technological advances in the world, we can’t address this basic issue of health care as a human right, then none of those advances would really matter to most people.

The combination of these experiences eventually led to late-night discussions about how they could channel the lessons of organizing and advocacy worldwide into tackling many of the systems and policies at the root cause of the global health crisis.

Since then, Amin and Asthana have hit the ground running, using their personal experiences and identities to inform their advocacy.

“From Barack Obama’s 2008 presidential campaign to the Arab Spring, in recent years we’ve seen how the time-tested advocacy power of grassroots organizing combined with new digital tools have enabled people around the world to create tremendous change,” Amin said. “When it comes to the right to health, we’ve never seen a truly global movement lead by marginalized communities. Over the next five to 10 [years], we hope we can build that.”

Both Amin and Asthana believe their intersectional South Asian identities have informed their perspective about health advocacy. Growing up as a woman of color in a predominately white community deeply shaped how Amin viewed others’ social experiences.

“My own experience as an Indian woman working in many all-white spaces is a constant reminder of American society’s rigid and outdated understanding of gender, especially the idea that you can somehow be ‘gender-blind,’ as if you fully separate the impact of gender identity on a person’s life from any other aspect of identity,” Amin said.

Similarly, Asthana cites that the value of duty to others was a prevalent theme in his Indian family and the core reason why he has turned to advocacy work.

“My dad used to tell me how my grandparents [in India] didn’t have a lot of money, but they used to celebrate anniversaries and birthdays by collecting clothes, making a meal, and then distributing the clothes and food to poor people [nearby],” Asthana said. “The first time I heard that, I was surprised, but as I grew older and I saw how this value of duty to others comes up again and again in South Asian cultures.”

Currently, Article 25 is piloting two major campaigns—one globally and the other in India. The global campaign, “Bury the Chains,” focuses on canceling debt burdens on poor countries and reforming harmful foreign lending practices.

“Unjust debts take various form, such as illegitimate loans given to dictators for their personal wealth, or unsustainable loans with exorbitantly high interest rates from rich countries or private banks,” Amin said. “But all stem from a legacy of greed and colonialism.”

Article 25 kicked off the campaign with a petition from Nepali youth activists calling on the International Monetary Fund (IMF) to offer debt relief for earthquake-hit Nepal.

The India-based campaign, called “Zero TB Deaths,” is lead by health workers, tuberculosis survivors and their families, and Indian citizens who want to prevent millions of TB deaths in India.

Moving forward, Amin and Asthana envision creating a massive movement of people who take political action to fight for policies that protect the right to health.

“Social entrepreneurs often avoid the word ‘movement’ in describing their vision because it’s a little intangible, which can come across as unsustainable,” Amin said. “But if you look at history, you see how movements produce long-term social change.”

Article 25 hopes to challenge policy and also shift cultural norms that live on by creating a global, data-driven grassroots movement.

To get involved with Article 25, check out their individual campaigns and sign up to stay updated and volunteer. There is also a beta version of the local campaign platform, where anyone can register a local Article 25 group.